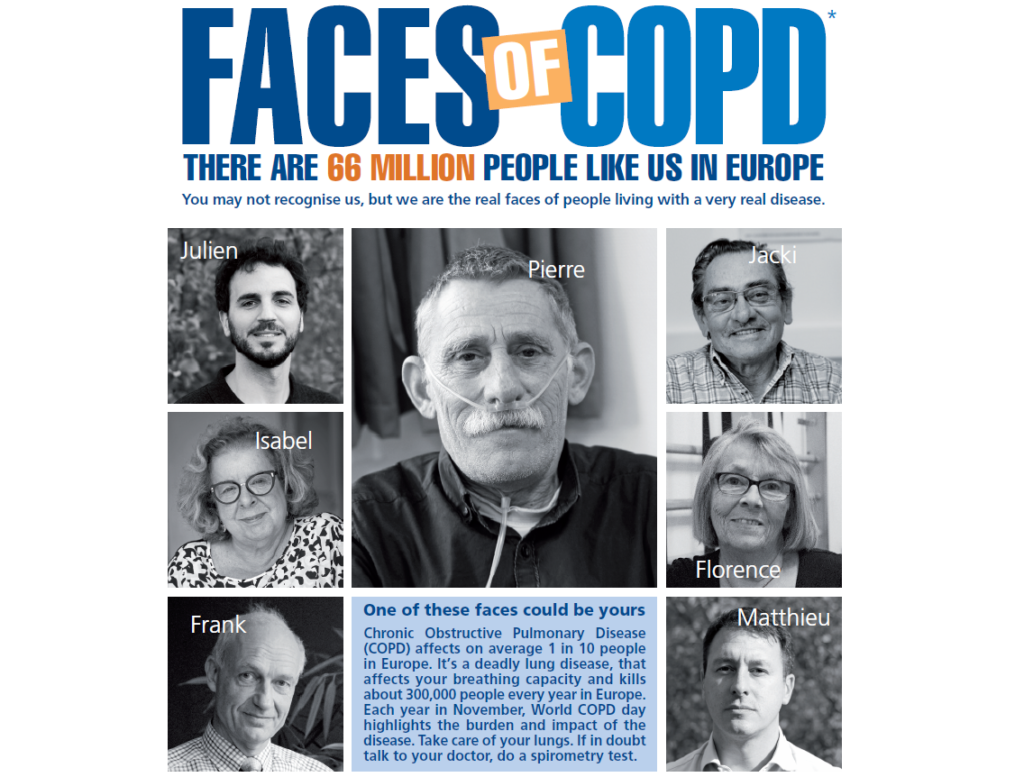 Wednesday 15 November, 2017 marked World COPD Day – an opportunity for people that live with and care for people with chronic obstructive pulmonary disease (COPD) to come together and raise awareness of the condition, and to call for better care and policies.

Taking part in the ‘Faces of COPD’ campaign

This year, the European COPD Coalition launched the ‘Faces of COPD’ campaign.

Despite how common COPD is, there is still low awareness of the condition and poor understanding of how it impacts upon people’s lives. To address this, the campaign aims to present the human face of COPD – primarily to policymakers in Europe.

People with COPD, their carers and healthcare professionals that treat people with the condition were invited to submit a photo of themselves. The photos were exhibited to policymakers in Brussels, featured in a public advertising campaign on the Brussels metro and were shared on social media.

The campaign was supported by organisations including the European Respiratory Society and ELF. As someone with COPD herself, ELF Chair Isabel Saraiva added her picture to the exhibition.

On 20 November, the ‘Faces of COPD’ campaign was taken to the European Commission, with an exhibition of the photos in the lobby and lung function testing offered to staff and policymakers. Vytenis Andriukaitis, the EU Commissioner for Health, was one of the many people who came along and supported the event.

Read more about the campaign.

The European Federation of Allergy and Airways Diseases Patients’ Associations (EFA) is currently running the #COPDMove campaign, which aims to promote the benefits of a physically active lifestyle for people with COPD.

As part of the campaign, EFA has launched a number of videos which feature people with COPD being active as a means to inspire and motivate other people with the condition to give exercise a go.

In time for World COPD Day, EFA published a video featuring Isabel Saraiva. Alongside people with COPD doing pulmonary rehabilitation, martial arts and resistance training at the gym, Isabel talks about her three policy hopes for COPD in Europe: better diagnosis, with spirometry tests available to people at risk; support for quitting smoking – especially programmes tailored to people who work during the week; and access to pulmonary rehabilitation, which is proven to help people with COPD to manage their condition.

Former ELF Chair Dan Smyth went along to the launch event of this exciting new project in Dundalk, Ireland.

As well as working together on research that aims to better understand COPD and improve the lives of people living with the condition, the project will see the PhD students carry out public engagement activities.

How did you celebrate World COPD Day this year? Send us a short report and some pictures of your activities so that we can add it in our next newsletter.