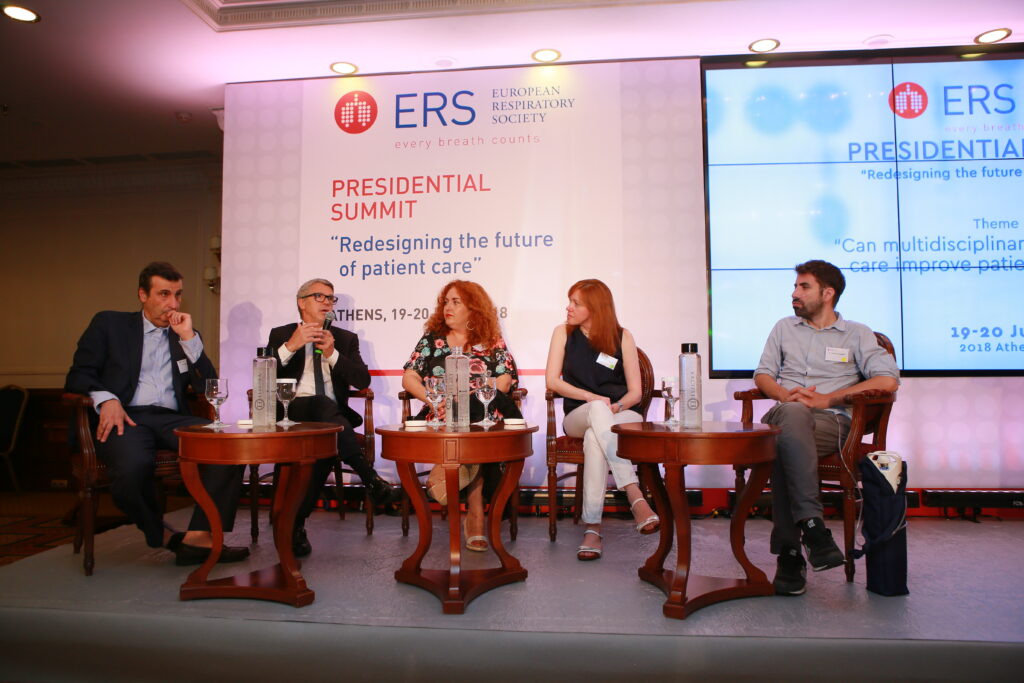 This year the summit had the theme of ‘Redesigning the future of patient care’, and ERS President Professor Mina Gaga really wanted it to focus on what patients need in the future.

The 2018 ERS Presidential Summit took place in Athens, Greece on 19–20 June. This year the summit had the theme of ‘Redesigning the future of patient care’, and the current ERS President – Professor Mina Gaga – really wanted it to focus on what patients need in the future, and to give them a platform to share their experiences. This resulted in a really hard hitting and emotional event.

The whole agenda was based on the survey that the ELF Patient Organisation Network responded to on the future trends that affect them and their members. The findings of this survey were presented at the outset of the event by ELF Chair Isabel Saraiva. In addition, patients were included in the agenda alongside lung health experts and policymakers.

The main programme of the summit kicked off with a powerful testimony from Greek cystic fibrosis patient Dimitri Kontopidis and a video from EU Health Commissioner Vytenis Andriukaitis, which set the tone for the rest of the high-level event.

Day one of the two-day event focused on a number of key themes – multidisciplinary and specialist care; the ageing population; and the future cost of healthcare. These were structured in the style of short presentations followed by an interactive debate. Patient speakers included Marta Almagro from Spain, who gave her experiences of being treated by a multidisciplinary team for bronchiectasis, and Matt Cullen from Ireland, who has been using an app to better manage his idiopathic pulmonary fibrosis symptoms.

Following the main plenary session, speakers and attendees were invited to take part in breakout sessions in which they collaboratively developed solutions to the challenges raised in the patient survey. Potential actions suggested included: doing some work on end of life care – reducing the stigma and making conversations possible; bridging the gap between professionals – both specialist and generalist – and patients; developing standards for healthcare apps so patients know what they can trust; and promoting the concept of incorporating lung care into everyday social clubs and activities, such as singing and dancing.

Janette Rawlinson – a lung cancer survivor – explained that people are unaware that lung cancer care is improving and therefore do not go and seek medical help when they have symptoms, as they believe there is no hope. Merrel Hennink from the Netherlands explained how her cancer was diagnosed and how the revolutionary treatment she is receiving has driven her to raise funds for research in the field. It is hoped that some concrete actions on lung cancer screening will come from the summit.

Following the event, Professor Gaga stated: “These have been two extraordinary days! Knowing the scientific data and clinical guidelines is imperative, but it is patients who put a face to disease, give us a new perspective and allow us to get the true measure of the problems and the impact of the solutions. They give us the empathy we need to try harder and to get better. The summit has been an open dialogue with patients, doctors, policymakers, the pharmaceutical and medical technology industry – all stakeholders. And it has been both scientific but also moving and out of the box. This is how we can move forward, together”.