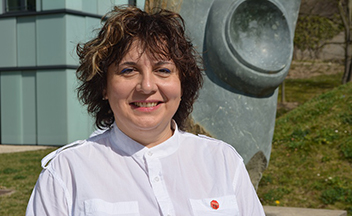 Dr Lucica Ditiu, Executive Secretary of the Stop TB Partnership participated in the European Lung Foundation/European Respiratory Society Healthy Lungs for Life roundtable event at the European Parliament in January. Ahead of World TB Day on Tuesday 24 March, she offers an overview of their efforts to fight the disease.

Can you tell us about the Stop TB Partnership and your area of work?

The Stop TB Partnership is a global partnership that was set up 15 years ago. We are currently hosted by the United Nations (UN) and have over 1,300 partners, including large bilateral organisations, global donors, research institutions, communities affected by TB, safe space organisations and other UN partners.

Our dream and vision is to lead the world towards a future without TB. One of our main priorities is building partnerships and ensuring that we are all working towards the same goals. In addition, we focus on advocacy, communication and making sure that resources to fight TB are available where they are needed.

We provide concrete support to our partners through our Global Drug Facility, which offers quality-assured drugs and diagnostics for TB. Through our TB Reach initiative, we also award funding to our partners, from governments to smaller organisations.

How did you become involved in the field of TB?

I am a doctor from Romania, which has a very large number of people with TB. I initially wanted to become a gynaecologist, but, after doing a placement as part of my training, realised that it wasn’t for me. I then decided to become a lung disease specialist, and became interested in TB. During my training, I would look at the TB data and see that there were lots of young women with the disease and would put myself into their shoes. Together with my colleagues, I wrote a successful funding proposal for the TB programme in Romania, and I became involved TB control in every county in Romania, which really brought the effects of the disease to life for me.

I am a strong believer in people, and can easily relate to people with TB, particularly those from vulnerable groups. I very much believe in giving a voice to people affected by TB, and involving them in our work. We are not completely there yet, but have seen major progress over the last 3 or 4 years.

What are the current priorities of the Stop TB Partnership?

Our secretariat is made up of around 40 people and is really driven by our vision to stop TB. We are in a privileged position and need to serve and support those around the world with less opportunity to fight for themselves. Our overarching priority is to make sure that TB is at the top of the agenda for all key stakeholders and decision makers at global, national and regional levels.

Specifically, this year we want to finalise the 2016–2020 Global Plan for TB, the first in the series of plans which, if properly funded and implemented, will help achieve the World Health Organization (WHO) target of ending TB by 2035. We also want to maximise the huge efforts among Brazil, Russia, India, China and South Africa in recognising the role TB plays in their public health agenda, and hope that, with our support, these countries will be able to cover their own TB needs and will serve as an example to the rest of the world. Finally, we want to work with our partners to advocate for investment into new tools so that we can have shorter courses of treatment for TB with less side effects.

We want countries to be more ambitious and to think innovatively about fighting TB. We have decreased 1.5% of the number of new TB cases each year, which is good but still very slow. If we don’t accelerate beyond this, TB rates will still be pretty in 150 years. I also want to make sure that we really involve those affected by TB in our work.

Could you expand on this year’s World TB Day theme, ‘Reach, Treat, Cure Everyone’ and how that relates to your work?

Our figures show that we are making progress with the fight against TB, but that this is too slow. We estimate that there are 9 million new TB cases globally every year. Of these, we consistently miss between 3–3.5 million cases per year. This is extremely frustrating; we want to try and find all of these people and give them a proper diagnosis and treatment. It is unacceptable that there are people out there with TB who are quietly spreading the disease, suffering and even dying without anyone knowing that they have it. The hidden cases are very often among the vulnerable people who may face many barriers to accessing healthcare. Unless we can find and treat all people with TB, there is no hope of a world free of the disease. TB also has many links to tobacco, nutrition and different conditions, so we need to broaden the spectrum of our partnership to achieve our goals.

What do you consider to be the greatest challenges to the fight against TB?

One of the biggest challenges is the lack of attention being paid to TB. People will never be able to address TB unless we give it a human face so that they can understand it and its impact on people with it. TB programmes are not always well-connected to decision makers. Advocates can find it very difficult to arrange meetings with ministers to discuss the problem and to keep TB on their agenda. We need to mobilise the people affected by TB and the vulnerable groups to speak more about their experiences and put pressure on those in charge.

My work can be very challenging and frustrating at times, but I am very happy to be working in the field of TB. I feel a huge responsibility to support the people we are working for. One of the most rewarding parts of my job is receiving emails from individuals or very small non-governmental organisations asking for advice related to their day-to-day challenges. I love being able to bring these people a bit of hope – these smaller human interactions are just as important as bigger actions.

What are you most proud of in your career?

I am very proud of my previous work as a medical officer on a European Commission-funded project that aimed to rebuild the TB programmes in Albania, Macedonia and Kosovo following the war in the Balkans. After 9 months we succeeded in having 100% implementation of a significant amount of euros and were able to see a concrete difference. We were given funding to continue the project for another year.

When I joined the secretariat, we didn’t have the profile that we would have liked – we weren’t appearing at the table with the big players in public health. I am proud that this is something we have managed to turn around.

Another thing I am proud of is the TB Reach initiative that I co-led and developed, initially with funding from Canada to increase the number of TB cases detected. TB Reach has since grown and is recognised internationally, and provides significant and innovative ideas to other major donors.

I am also very proud of the fact that the Stop TB Partnership has a fantastic team and board who are enthusiastic about our work.

In the field of TB, engagement with people that currently or have previously had TB and their families has been historically very weak. I think that we need to include their voices and experience much more. This year, some of our partners and the US Government will hold a global meeting for people with personal experience of TB in which they can speak to one another about their priorities.

The fight against TB is huge, with 9 million new cases each year, and 2 billion people currently infected globally. When you have such a huge battle, you either need a big army or a very smart strategy. We need to start shifting our minds in different ways, and I think we should try to make 2015 the year in which we change the way we operate.