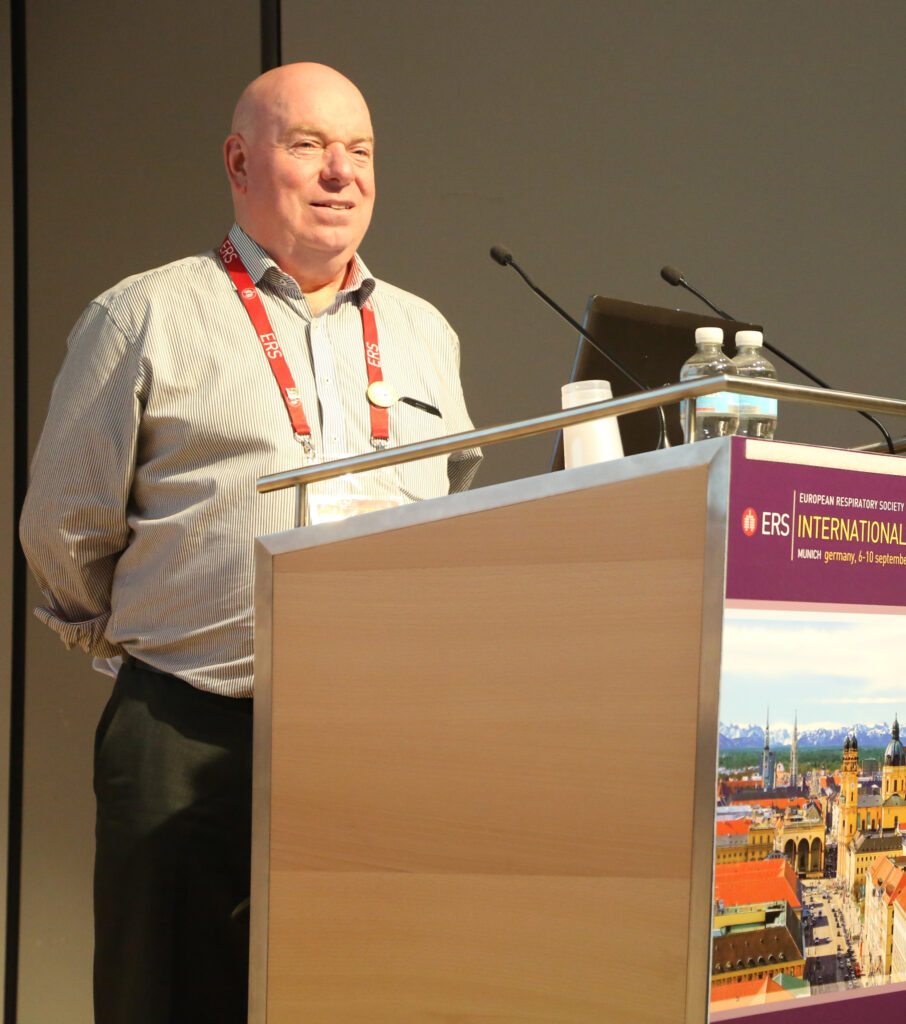 Can you tell us about your background and how you became involved in ELF/ERS?

As far back as May 1993, I was advised by a healthcare professional that unless I tackled the health issues that I was facing, I wouldn’t see Christmas. I had sleep apnoea with multiple symptoms and hearing this was the wake-up call that I needed.

I’d taken early retirement from the banking sector and decided to focus my energy into helping others with sleep apnoea. I was disappointed at the lack of available information on the condition, so I decided to research it. I eventually got involved with a number of other people with the condition, and we formed The Irish Sleep Apnoea Trust (ISAT).

In 2009, we were contacted by ELF to become involved in their network of patient organisations. This was the start of my connection with the Foundation, which has grown year on year since.

In 2010 and 2011 we attended the ERS Congress. This gave me the opportunity to learn more about ERS and ELF. In 2011, during a Patient Advisory Committee meeting, we spoke about developing an online training system to develop the skills of patient advocates and try and help them deliver their messages.

This is the type of thing that I believed in and saw a great future for it. I subsequently joined the European Patient Ambassador Programme (EPAP) Steering Committee, where I really started to learn about ELF/ERS.

Although I was unable to attend the Congress in 2012 in Vienna, I was elected during the Patient Advisory Committee meeting to be part of the ELF Council. ELF Council meetings are interesting. I love the discipline of a good agenda that is adhered to (probably goes back to my banking background). It ensures that good decisions are made and followed up. It also allows for meaningful input from all members.

I believe that the Barcelona Congress in 2013 was the best I’d attended from a patient perspective. The buzz of the patients and patient advocates being positive and forming networks with each other was great to see. It was during this meeting that I decided I wanted to go for the ELF Chair position to build on the positive steps that had been taken up until this point.

What made you want to become an advocate for people with lung conditions?

Sleep apnoea has been my primary focus as it is the condition that affects me. However, through my work with ELF and also my membership of the Irish Lung Health Alliance, I have learnt a great deal about other respiratory health conditions and their impact on people.

I am also horrified at the lack of resources being channelled into paediatric respiratory healthcare throughout Europe.

My experience has given me the skills to be an advocate for people with a lung condition and in becoming the ELF Chair I hope to use these to positively influence lung health across Europe.

What made you want to get involved in lung health at the European level?

I believe that, for real change to occur, we must be operating in the European arena. We must advocate in Europe (as well as in our own countries) to bring about changes in opinion and strategy in the hope that such a combined effort will filter down to positive benefits for patients.

What are you priorities in your role as ELF Chair during your three years?

I am committed to completing the existing strategies in line with the ELF 5-year plan, put in place by Monica Fletcher.

In addition, I would like to see ELF ‘grow the numbers’ by getting more groups involved with us. In doing this we must ensure that all groups are respected and their individual identities are not diminished or reduced, whether large professional advocacy and support groups or smaller patient-focused groups.

We must also identify the best practice and practical methods of attracting and helping our partners. I also hope to see the further development of ELF through all media channels to increase its presence in the public eye across Europe.

In terms of the areas of work that we focus on in the coming years, I would also like to see ELF interact with the health departments of the major employers in Europe to reinforce the importance of healthy lungs in the work environment. As I have already mentioned, the lack of resources for paediatrics is also something I’m really keen to tackle.

In a nutshell, it all comes down to relationship and trust building and I would like to build on the positive work that has already been taken by ELF to increase our networks and partnerships in Europe.

How do you see the role of patients within the ERS developing?

Breda Flood, the President of The European Federation of Allergy and Airways Diseases Patients Associations (EFA), was the first patient to hold a role within ERS on the ELF Council. In taking the position of ELF Chair, which includes a seat on the Executive Committee of ERS, I will be building on the great work Breda has started. I am conscious of being placed at the heart of respiratory health development in Europe and further afield.

It is a first for a patient to take up this mantle and it demonstrates that ERS has shown that they are not only willing to but also happily embracing the patient view, both at the leadership level and within all activities and projects.

It is imperative that ELF continues to encourage patients to engage with us and our projects so that we can share our experiences and contribute to effective collaborations between patients and healthcare professionals.

As a voluntary advocate, time management is of the essence. Most enjoyment for me comes from the ‘buzz’ of a success, no matter how small. This could include getting medical equipment donated to a low income patient or helping a patient become compliant with their treatment. This could be referred to as ‘job satisfaction’, but, for me, it’s more than that.

What are you most proud of in your career as a patient advocate?

I suppose there are many examples, the vast bulk of which relate to getting results for patients. On the public side, speaking before an Irish Government Committee at which I explained the plight of paediatric sleep disorders medicine in Ireland was a highlight for me.

I’m looking forward to many more of these moments over the next three years.