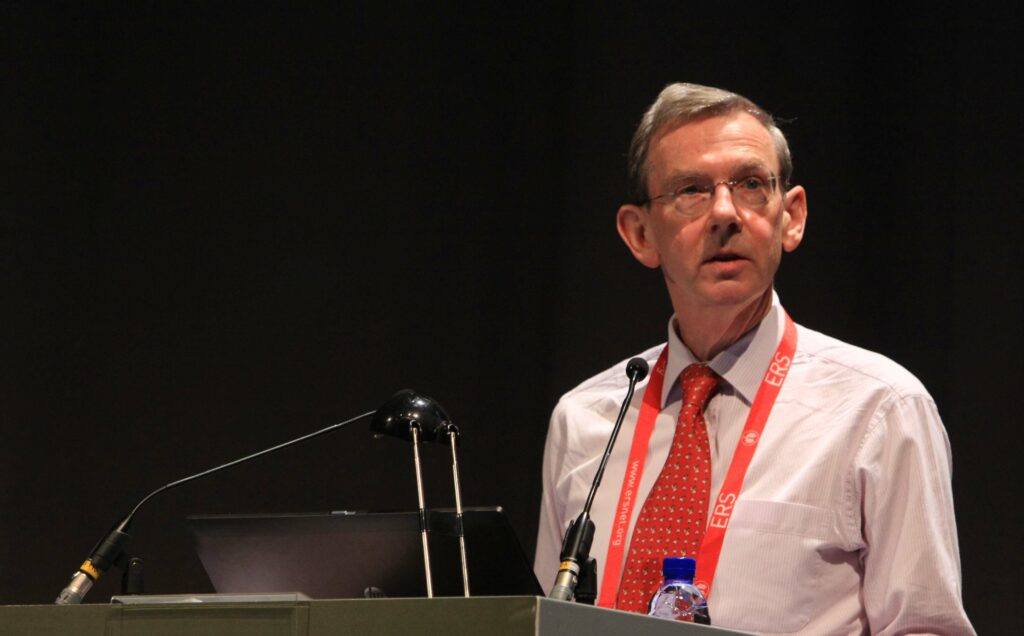 Following his diagnosis with idiopathic pulmonary fibrosis in 2010, Derek Ross has presented at conferences, taken part in research projects and, most recently, written a chapter giving the patient’s perspective for a prestigious medical publication.

Could you introduce yourself and how you came to be a patient ambassador?

I was diagnosed with idiopathic pulmonary fibrosis (IPF) in 2010 and I first became involved in advocacy work through my hospital. One of my doctors asked if I would like to take part in a research project, which would involve me visiting the clinic more often. I agreed, and this developed into a second, and then a third research project.

One of the consultants I was seeing, Professor Athol Wells, was speaking at the European Respiratory Society (ERS) International Congress and through this I was asked if I would like to join and give the patient’s perspective of IPF. I went along to the Congress in Barcelona in 2013 and spoke about my condition.

Following this, Professor Wells then invited me to write a chapter as a chapter in the ERS Idiopathic Pulmonary Fibrosis Monograph.

How was your experience of writing the chapter?

I am used to writing things quite quickly, as I write a lot of reports at work, and I found it best to just sit down and start writing.

The original idea for the chapter was ‘unmet patient needs’, which developed into ‘key patient needs’, as patients’ needs are not all the same, and some may be partially unmet.

I was very aware that it is impossible to accurately represent every person with IPF’s experiences, so, while the chapter was written from a personal perspective, I also used information from several patient focus groups held for research projects I have been involved in.

What were the key points you wanted to highlight in the chapter?

As I was writing, one of the important things that jumped out to me was that people who were referred to a specialist centre early, and whose care was managed by specialists, seemed to be happier with the quality of their care than those receiving more general support.

One of the key issues is communication and giving information to patients in the right format and at the right time. Very few people are given information leaflets, so have to look for information online. People with IPF also need better information on prognosis, and how everyone responds differently to the condition. This can help people when it comes to practical decisions about their lives.

Diagnosis is another important aspect. Quite a lot of people get an inconclusive diagnosis before they are told they have IPF, and under-diagnosis is a problem. My diagnosis was handled very well, but many others feel as though they do not have enough time with their healthcare professionals to fully understand what it means for them.

I also focused on management of IPF. The centre I go to is very busy, and I tend to see different doctors each time, which is fine for me, but some people would prefer the opportunity to build up a personal rapport. People with other health issues alongside IPF find that there is little coordination when it comes to treatment of both or all of their conditions.

I wanted to draw attention to drug approval issues. We need to have processes in place before drugs are approved, but it would be good if there were mechanisms to speed things up for conditions like IPF. There are also concerns around eligibility criteria for certain drugs.

I also wrote about pulmonary rehabilitation and end of life care, two other important topics.

Are there any other patient ambassador projects you would like to mention?

I have also worked with the European Lung Foundation and the Irish Lung Fibrosis Association on an ERS project that developing recommendations for treating IPF.

The hospital I visit has asked me to write a page in their research programme about the patient group which reviews their research projects from our perspective. It is very interesting finding out what the researchers want to do, and giving an opinion on how they go about it.

In addition, I am a member of a group that reviews articles for professional articles before they are published.

What advice would you give to someone considering becoming a patient ambassador?

It is important to understand that you are there to give your own personal experiences, as well as provide a representative picture of how other people with your condition feel. I think it is a good idea to also try and collect information from other people in a similar situation.

My patient ambassador work has involved a combination of going to meetings, writing, and being involved in research projects. It is important that you try and get involved with the things you are interested in. I would also recommend that you make sure you have enough time to fit it in with your other commitments.

In this work, I think it is important to be positive, as well as raising issues about where things could be better from a patient’s perspective. On the whole – and I acknowledge that I have been quite lucky – the care that I have received has been very good, so I would not want to come across as overly critical to the people that have provided me with that care.

What advice would you give to healthcare professionals or researchers who may be considering involving patients in their work?

I think that the patient-doctor relationship has changed over the years, and that the medical profession is recognising the importance of working collaboratively with patients.

Patients are not always used to research and policy processes, so may not be familiar with jargon and all of the key issues. Therefore, it is best to use clear, straightforward language and not make assumptions about what everyone will necessarily understand.

Check out the European Patient Ambassador Programme, our free elearning course that will introduce you to some of the skills and knowledge you may need to represent yourself or others successfully.