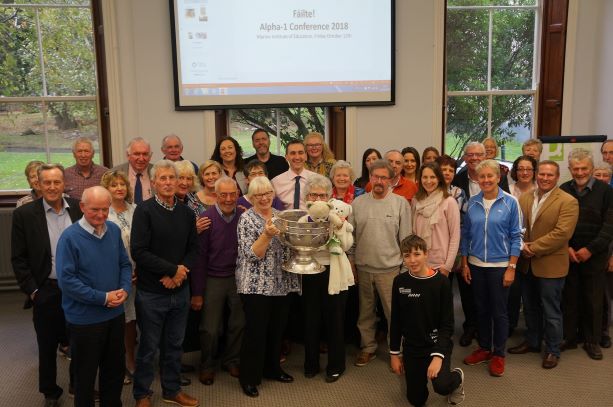 Patient organisation round up: September 2019

Read about the activities and events patient organisations have taken part in across Europe this month.

In the last month, patient organisations across Europe have been attending congresses, meetings and workshops to share knowledge and experiences of lung conditions, helping to improve care and treatment.

More than 2500 guests attended this year’s COPD Congress. In addition to those affected, relatives and interested parties were also present, as well as many well-known physiotherapists, medical specialists and doctors.

Further information about the congress can be found at:  copd-deutschland.de and lungenemphysen-copd.de

The Spanish Alpha-1 Association has organised the second national meeting of patients and families affected by Alpha-1 Antitrypsin deficiency, which will be held on 23-29 September. The meeting will take place in the Spanish city of Burgos and will deal with topics related to research, treatment and the day-to-day life of those affected by this rare genetic condition.

Alpha-1 Ireland are preparing for their Alpha-1 Conference 2019 taking place on Friday 25 October in Dublin. This free conference is an informal educational meeting for people affected by Alpha-1 with a packed agenda of interesting talks. Tea and coffee will be available for attendees on arrival with lunch also provided. A place can be reserved by emailing alpha1@rcsi.ie.

In collaboration with the Rhode Public Policy (RPP) Group, the Alpha-1 Foundation will hold a webinar on Alpha-1 advocacy and public affairs. Through this webinar viewers can learn more about advocacy activities at European and national levels and how to take part in this process. This training will focus on outreach strategies to policymakers and how to transform organisations’ objectives into political asks.

The Foundation Against Pulmonary Hypertension (FCHP) has received financial support by the “Red Solidaria” programme to carry out the project “Pulmonary Hypertension Awareness”. This project aims to raise awareness of this condition since it is considered a rare disease which is disabling, progressive and life threatening. FCHP will use social media to spread knowledge as well as create information leaflets and give talks in various hospitals.

SarcoidosisUK is very excited to announce their newest information service – Patient Information Videos. The charity has visited sarcoidosis experts across the UK and filmed them explaining sarcoidosis. The videos will help anyone affected by sarcoidosis to understand more about their condition.

Four educational meetings involving 400 hundred patients have been held in Izmir, Turkey between May and September 2019. These meetings were organised by the patients’ society of PAHSSc and rare diseases, and covered various topics related to IPF.

PAHSSc is also planning a ‘Cure for IPF’ run at Ege University in İzmir on 21 September with patients and supporters for awareness.

Alongside these activities, PAHSSc is working to raise awareness about the Presumed Consent Organ Donation model, which would enable lung transplantation in Turkey.

A pulmonary hypertension patient climbed 2061 metres to the top of the Hoverla mountain in Ukraine. Nadia Nus, who has aspired to climb this mountain for a long time, talked about climbing it for others who also suffer from this condition: “While climbing the mountain I was thinking about my PH friends. It was my personal achievement, but I did it for them as well”.

Aspergillosis Trust (AT) patient stories to be exhibited at RAREsummit19

The National Aspergillosis Centre (NAC), Manchester, are exhibiting at RAREsummit19 on behalf of Aspergillosis Trust (AT). NAC are presenting a patient journey poster, along with two patient stories.

Sandra Hicks, co-founder of AT will be recording a video for ELF to present at the ERS Congress in Madrid, Spain. It’s on the Primary Immunodeficiency Syndrome she has, which is causing atypical lung infections and bronchiectasis.

The scheduled skydive by Yvonne Gibson was cancelled due to poor weather conditions, meaning that there is still time to donate. The rescheduled date is 20th October. Visit Yvonne’s Just Giving page.

The Italian Cystic Fibrosis Research Foundation (FFC) was involved with the first ever Adult Cystic Fibrosis International Workshop held by the University of Milan. Thanks to improvements in treatments of cystic fibrosis, people affected by the condition often reach adulthood, meaning it is no longer just a paediatric disease. Caregivers and clinicians face new challenges in dealing with adult patients. The workshop gave the opportunity for people to share experiences and ideas. Representatives from scientific research, clinics and patients attended and spoke at the event.

The PCD Family Support Group is organising a PCD (primary ciliary dyskinesia) day in Scotland at the Queen Elizabeth University Hospital, Glasgow. Attendees will show their support and hear about the latest research into PCD. Everyone is welcome to attend, and the event will include lunch and lots of fun activities.