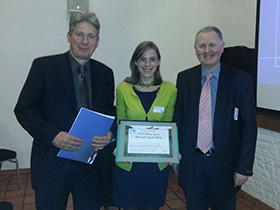 New national asthma strategy to be developed in Australia

At the recent Parliamentary Friends of Asthma function at Parliament House in Canberra, the Hon. Peter Dutton MP, Minister for Health and Minister for Sport, announced that the Australian Government would provide AUS $200,000 for the development of a new National Asthma Strategy.

The National Asthma Council Australia and Asthma Australia, will work together in its development with the asthma stakeholder organisations (people with asthma, GPs, pharmacists, respiratory physicians, practice nurses, asthma educators, and others).

On 20 November, 2014 representatives of the Czech Alliance against Chronic Respiratory Diseases presented the latest research data on chronic obstructive pulmonary disease (COPD) to the Czech parliament and insurance companies.

In parliament, they discussed the causes and effects of the disease, issues around smoking and treatment options. Representatives of insurance companies were invited to demonstrate the global burden of the disease, to aid better and quicker reimbursement procedures and new strategies in COPD treatment. The parliament agreed to make the early detection of COPD a priority for the future.

Asthma UK has published new research showing that a shocking 8 out of 10 people with asthma are not receiving care that meets the most basic clinical standards. These findings come more than 6 months after the National Review of Asthma Deaths showed that two out of three asthma deaths are preventable with better routine care.

If you live in the UK please email your local NHS today, asking them to ensure that every person with asthma where you live is given care that meets basic clinical standards, including a written asthma action plan. Adding your own experiences will really help persuade them to take action.

EFA calls for easier access to medical oxygen on aeroplanes

On 19 November, 2014, World COPD Day, the European Federation for Asthma and Airways Diseases (EFA) called on European air travel authorities to rule on the use of medical oxygen in airports and plane cabins. EFA and its members have requested the air operators involved to use the form by the International Air Transport Association (IATA) and offer oxygen in-cabin at an affordable cost.

Cittadinazattiva (Active Citizenship Network) used the Italian Presidency of the Council of the European Union to get their voice heard at the highest European level in their call to make chronic pain a health priority in Europe. They were involved in informal discussions of the European health ministries in September, during their conference in Brussels in October and again in Brussels in November at the Conference of Societal Impact of Pain by the European Pain Federation.

More than 2,000 employees were involved in solidarity initiatives organised by the company. In recent years, TUI Travel A & D and its employees have raised more than € 15,000 for the foundation.

On 18 November, 2014 l’Association Asthme & Allergies facilitated another ‘Tchat’ – an online chat for people with asthma and/or allergies. The ‘Tchat’ gave people the opportunity to put their questions to experts in the fields of lung health, allergy, paediatrics and psychology.

Belgian sleep apnoea association VAPA has been very active in recent months. They took part in the VOCA Health Community Congress in Brussels on 30 September, 2014, held their first annual meeting on 4 October and presented the VAPA Sleep Award during the BASS autumn meeting on 28 November.

However, their greatest achievement has been partnering up with Apneuvereniging Nederland for future cooperation and the sharing of resources.

The Association for Ideopathic Pulmonary Fibrosis Enjalran Pierre (AFEFPI) has become a member of the Alliance for Rare Diseases, and hopes that this will give the organisation greater visibility.

Earlier in the year the Nontuberculous Mycobacteria Info & Research in the USA co-sponsored a day-long research meeting at the American Thoracic Society international conference in San Diego to define a research agenda for nontuberculous mycobacterial lung infections. A patient representative was present at the meeting to share personal experience and hope for future research.

It has been a busy few months for the Pulmonary Fibrosis Trust. They are currently helping three people take holidays using their ‘oxygen away from home service’. The service provides a portable concentrator so that patients can travel by plane to destinations, such as Tenerife and even Mexico and Australia.

The trust recently raised £2,000 by packing shopping bags at a supermarket and is also currently helping patients with the cost of stair lifts and mobility scooters.