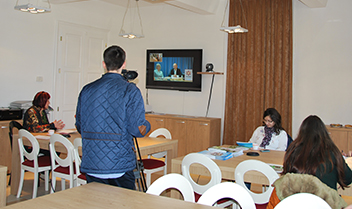 The Romanian National Alliance for Rare Diseases and the Romanian Prader Willi Association have launched two new projects. The first is a partnership for the future with Frambu – Resource Centre for Rare Diseases Norway to increase access to specialised services for people with disabilities caused by rare diseases in Romania (pictured above). The second is a national project to increase the responsibility of local governments for people with rare diseases.

March was busy for FENAER. They have been actively campaigning on the issue of hormone disrupting pollutants in school cafeterias, hospitals, municipal parks and public areas to limit exposure to substances related to an increase in serious diseases.

Matt Cullen, who has idiopathic pulmonary fibrosis (IPF), unveiled his first solo art exhibition in Dublin in support of the Irish Lung Fibrosis Association (ILFA). All proceeds will go towards ILFA’s work as a thank you for the organisation’s incredible support during his illness so far. The exhibition is entitled “Turning Full Circle” and celebrates the circle of life whilst allowing the artist to express himself as an IPF patient.

The British Snoring & Sleep Apnoea Association is preparing for National Stop Snoring Week on 20-25 April, 2015. It is an annual event promoting greater awareness of snoring and treatment of the condition. During the week, the main causes of snoring and sleep apnoea and why many of them can be inherited will be discussed.

To mark the week, the association is asking people who belong to a family of snorers or have sleep apnoea (two or more generations) to share their story.

A representative of the UK Primary Ciliary Dyskinesia (PCD) family support group was invited to speak at a PCD Young Researchers Meeting in Austria in March. Sadly, due to costs, no one from the organisation was able to attend, though many of its members were interested. However, their video, produced by the European Respiratory Society, was presented, giving the patient’s perspective of living with PCD.

The Helping Hand Foundation in Pakistan marked World Sleep day to help educate the community about sleeping disorders, their prevention and how to establish better sleeping habits in mothers and their children in Pakistan.