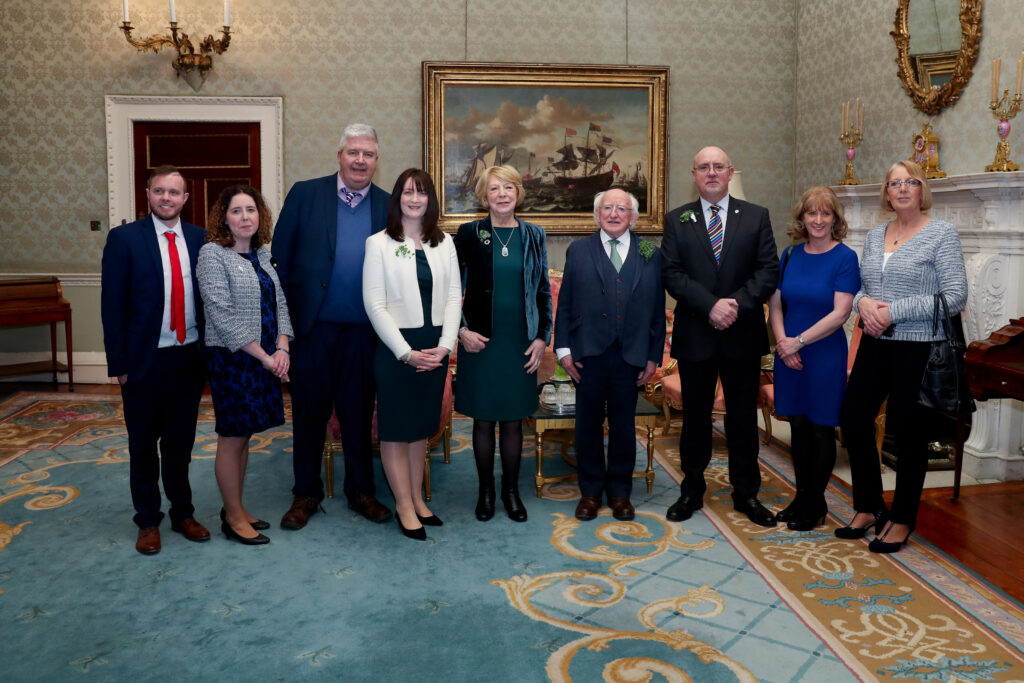 Patient organisations have been working tirelessly to raise awareness of lung health issues among both the public and policymakers and to call for change. Read an overview of some of their recent activities.

Photo: Members from Irish patient organisations meet with the President of Ireland, Michael D Higgins (fourth from right), in recognition of their work on organ donation and transplantation.

Members of the Alpha-1 Foundation Ireland, Cystic Fibrosis Ireland, the Irish Heart and Lung Transplant Association and the Irish Lung Fibrosis Association were invited to meet with the President of Ireland, Michael D Higgins, on St Patrick’s Day in recognition of their work promoting organ donation and transplantation. The respiratory patient organisations who are part of the Irish Donor Network were joined by their colleague from Cystinosis Ireland.

Throughout April various activities have taken place across Spain to mark Sarcoidosis Awareness Day on 13 April. Celebrations have included historic and important buildings being illuminated in purple, including the Tower of Hercules in La Coruña, the only Roman lighthouse and the oldest in operation in the world.

The Portuguese Lung Transplant Association held their general assembly on 24 March, where they approved the 2017 accounts and changed their board members. In the past month, members of the Association also attended meetings with associations of chronic lung conditions to develop collaborations, including through the Donation and Transplantation International Symposium.

The Association has also been working on a new website and hopes to launch it in the coming weeks.

On 25 May, the Portuguese Lung Foundation, in partnership with the University of Lisbon, will host an event on forest fires in Portugal and the impact on lung health. Featuring talks from experts in health, engineering, climate change and fire safety, the event is free to attend.

Find out more and register to attend [in Portuguese].

The Romanian TB Patients Association (ARB-TB) took part in the “Light up the World for TB” campaign, part of the Stop TB Partnership initiative to end tuberculosis. As part of the campaign, Bucharest City Hall was illuminated in red on March 24, 2018 and ARB-TB represented the voice of patients in the public space through media interviews and awareness-raising.

Updates from the Spanish Foundation against Pulmonary Hypertension

The President of the Fundación contra la Hipertensión Pulmonar (FCHP) recently met with the President of Spanish Football Referees and representatives from the Football Federation and the Real Federación Futból de Madrid to discuss a new initiative to include people with a disability in football. With a special focus on children and adults affected by pulmonary hypertension (PH), the project will help to increase access to sport for those who normally find it difficult.

Health associations from the Hospital Infanta Cristina de Parla also came together this month to focus on PH. The event was supported by the local hospitals, health ministers and city hall of Parla, and all the patient associations who took part to provide outreach to people with PH.

Find out more [in Spanish].

This month two young members of the Spanish National Association of Pulmonary Hypertension, aged 11 and 12 years old, took part in a sponsored walk to raise awareness and funds to improve the lives of PH patients.

The 3rd International Meeting hosted by the European Idiopathic Pulmonary Fibrosis and Related Disorders Federation (EU-IPFF) took place in Brussels on 21–22 April. Once again, it saw positive co-operative efforts from all the IPF patient groups, representing 29 patient groups from 16 countries, who have all committed to working together to raise awareness of IPF and pulmonary fibrosis with a major campaign for 2018. The campaign will be launched during the global pulmonary fibrosis month, which falls in September. EU-IPFF would like to thank the patients, patient advocates, healthcare professionals and industry representatives who attended the meeting and contributed to it.

25 April marked the first European Alpha-1 Awareness Day dedicated to raising further understanding about this rare genetic condition. A roundtable discussion, hosted by Alpha-1 Global, took place at the European Parliament in Brussels, where Alpha-1 leaders from seven countries presented the situation of access to care for people with the condition and made policy requests to the MEPs who were present. The Day was marked by six Members of the European Parliament committing to improving the situation of Alpha-1 Antitrypsin Deficiency (AATD) in their respective countries, with support, awareness and collaboration growing among policymakers as a result.