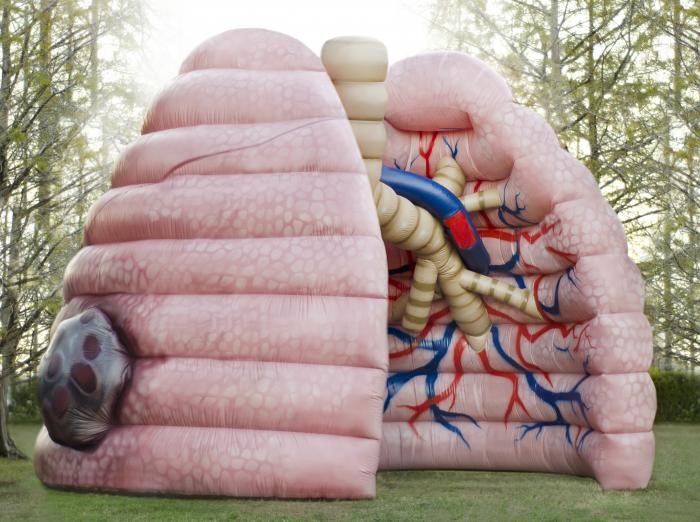 This month patient organisations across Europe have been running awareness events and campaigns, attending training and raising funds to support their activities.

This month patient organisations across Europe have been running awareness events and campaigns, attending training and raising funds to support their activities.

This month the Irish Cancer Society celebrated its annual lung cancer awareness campaign. One of the reasons for the event is to raise awareness of how important it is to detect lung cancer early and to tell people about the signs and symptoms of lung cancer so that they can go to their doctor if they have concerns.

As part of the campaign, the Society brought the MEGA lungs (a portable, inflatable, walk through lung exhibit) to Dublin, Ireland. 650 people visited the exhibit over two days to discuss lung health and to get advice on how to stop smoking.

As part of World Rare Disease Day, Lovexair held a surf and yoga therapy event on a beach in Lisbon, Portugal. The aim was to promote the importance of physical activity for lung health. The organisation’s HappyAir ambassador Arran Strong played a key role in the event, showing people that his rare lung condition (Alpha-1) does not stop him from pursuing his passion for surfing.

On 25 March 2019, Women Against Lung Cancer in Europe (WALCE) began their 6-month pet therapy project in Turin, Italy. The project is called “IMPERA” and aims to improve symptoms of depression, fatigue, anxiety, sleep and mood disorders that affect up to 70% of people living with lung cancer. The project will involve lung cancer patients, carers and family members walking with dogs twice a week for six months.

This month Morbus-Osler Selbsthilfe e.V(HHT Germany) attended the second EURORDIS Winter School on Scientific Innovation and Translational Research in Paris. This was a week-long training programme that looked at how pre-clinical research (a stage of research in drug development before testing on humans) benefits rare disease patients.

On 8 April in Milan, Fondazione Fibrosi Cistica (FFC) will be attending the screening of the new film Five feet apart (Italian: “A un metro da te”) which has arrived in Italian cinemas. The film tells the story of two 17-year-old cystic fibrosis patients who fall in love between the wards of a hospital but must remain at least five feet/one and a half metres apart in order to avoid transmitting lethal bacteria to each other.

Watch the movie trailer in English or Italian.

This month FENAER attended the Annual General Meeting of members of the European Federation of Allergy and Airways Diseases Patients’ Associations (EFA), where they presented their new project on lung physiotherapy. The project includes a selection of free video tutorials of different pulmonary rehabilitation exercises.

Watch the videos (available in 6 languages).

The Macedonian Pulmonary Hypertension Association “Moment Plus” received a lot of support from various sports groups for the “Get breathless for pulmonary hypertension” campaign. 20 runners all wearing the campaign t-shirt ran 50 km through three cities in Macedonia, aiming to raise awareness of the importance of early diagnosis and therapy for people with pulmonary hypertension.

The Italian association “A breath of hope” organised a meeting between doctors, nurses and caregivers from a hospital in Rome and IPF patients and their family members. The speakers focused on three important aspects of quality of life: sleep (including sleep apnoea – pauses in breathing during sleep, wellbeing (including the variety of individual reactions to a diagnosis of IPF), and nutrition and its effect on treatment side-effects. Patients and their families felt reassured and said they were treated well and with respect.

Along with over 125 patient organisations, the Aspergillosis Trust signed an open letter to the British government calling for an urgent review and refresh of the UK Strategy for Rare Diseases before 2020. The organisation is also running fundraising activities including a sponsored weight loss and a blog about training for the Brighton marathon this month.

Ahead of European Alpha-1 Awareness Day (25 April), Alpha-1 Global and Alpha-1 Plus organised a round table discussion in the European Parliament on 21 March. The meeting focused on “the importance of timely diagnosis and sharing of knowledge across Europe”. Two Members of the European Parliament (MEPs) committed to supporting Alpha-1 patients. A full report of the discussion will soon be made available on the Alpha-1 Global website.

The Irish Lung Fibrosis Association welcomed Professor Luis Oritz from the University of Pittsburg Medical Centre, USA, to give a lecture entitled ‘The Irony of lung fibrosis: A fibroblast to treat Idiopathic Pulmonary Fibrosis’ at the Royal College of Physicians of Ireland. The lecture was attended by patients, caregivers, medical professionals, researchers and academics.

Fundación Contra la Hipertention Pulmonar (FCHP)’s project EMPATHY was one the winners in the Scientific Recognition Awards in Spain. EMPATHY is a pulmonary hypertension research project. It involves patients, their friends and family members, as well as doctors, researchers and institutions. The president of FCHP, Enrique Carazo, accepted the award on behalf of everyone involved, who were commended for their hard work, determination, courage and perseverance.

“Donate Life” was opened in the Austrian capital at the Bulgarian cultural Center on 27 March. Combining artistic photography, video footage and personal stories from people who have received lung transplants, the exhibition aims to promote organ donation in Bulgaria. Among the invited guests were National Assembly representatives, the Ministry of Health from both Bulgaria and Austria, as well as leading Bulgarian and Austrian transplantologists.

The First European IPF Patient Summit to be hosted in Warsaw, Poland

The European Idiopathic Pulmonary Fibrosis and Related Disorders Federation (EU-IPFF) is organising the first patient-led European summit on idiopathic pulmonary fibrosis (IPF), interstitial lung diseases (ILDs) and other rare diseases. The European IPF Patient Summit will be held in Warsaw, Poland on 24-26 April 2020 and will be a platform for patient groups, healthcare professionals and industry representatives to come together and discuss research, person-centered care, policy and advocacy for IPF and ILDs.

The Pulmonary Hypertension Ukrainian Rare Disease Association (PHURDA) raised funds to support people with pulmonary hypertension by collecting bottle caps. The activity aimed to raise funds whilst also taking care of the environment and encouraging people to take the time to recycle. Representatives also presented the project at a citizen meeting.

The Apnoea Association Flanders in Belgium held its annual spring meeting on 2 March. Professor Dirk Aerenhouts and Johan Verbraecken were invited to speak, and the discussion focussed on the relationship between sport, body weight and sleep apnoea. You can read the meeting programme on the Apnoea Association Flanders website. The group has also recently published data on continuous positive airway pressure (CPAP), a type of treatment for sleep apnoea.