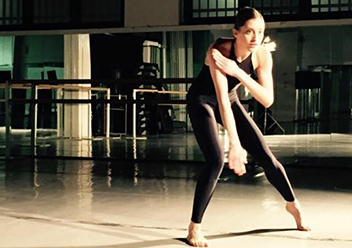 Picture: A still from the LAM Italia ‘Inner Sky video’.

To raise awareness about lymphangioleiomyomatosis (LAM), LAM Italia has produced an album, LAM sounds good, featuring tracks performed by Nicola Artico and produced by Marco Maggiore with the support of GSK. The album is available for download on Spotify and iTunes.

Nicola Artico has studied the effects of the sound of Indian instruments on the human body. He created a method of sound massage called “sound coach” and composed the music for the album after studying the impact of LAM on women diagnosed with the condition.

In addition, LAM Italia has made a video for ‘Inner Sky’, one of the album’s tracks, using dance to highlight the urgency for research into the condition. It was presented at their recent meeting on 24 July in Milan.

The Macedonian Cystic Fibrosis (CF) Association is mobilising members of the public to join their efforts to highlight the plight of Macedonians with the condition. They held several events in June to raise awareness of CF in Macedonia, highlighting the fact that treatment of CF is not part of the essential health provision in the country, with patients having no access to antibiotics and other vital treatments and medication.

Fundacion Respiralia is continuing with its sporty theme to raise funds for CF in Spain. Following their very successful annual swimming tour around the island of Formentera at the beginning of July, they followed up with a horse jumping competition on 25–26 July, in collaboration with the Palma Son Magraner Horse Club. The prize was the “Respiralia Trophy”, and all proceeds will benefit children and young people with CF.

Action for mesothelioma in the UK

The Merseyside and Cheshire Asbestos Victim Support Groups (UK) held their very successful Action Mesothelioma Day (AMD) on 3 July at Liverpool Town Hall. A number of speakers, including people with the condition and healthcare representatives, took part and gave presentations on the impact of this fatal condition, and the hardships faced by sufferers and their families.

Patient focused drug development event in the US

NTM Info, the US patient organisation for nontuberculous mycobacterial lung infections, is pleased to share that the U.S. Food & Drug Administration has announced the upcoming Patient-Focused Drug Development public meeting on NTM lung infections to be held on October 15, 2015, from 9.00am–5.00pm (local time) at their offices in Silver Spring, Maryland.