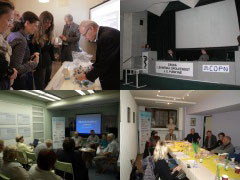 World chronic obstructive pulmonary disease (COPD) Day 2015 took place on Wednesday 18 November.  As part of their campaign, the European Federation of Allergy and Airways Diseases Patients’ Associations (EFA) highlighted the challenges faced by patients when travelling with medical oxygen, and the need for harmonisation of COPD care across Europe.

The Norwegian Alpha-1 Association has changed its name to Alfa-1 Norway. The change of name is easier to remember and is in line with their Nordic ’siblings,’ Alfa-1 Denmark and Alfa-1 Sweden. The three countries face very similar challenges.

On 19 November, 2015 the group gave a briefing on alpha-1-deficiency and the challenges faced by people with the condition to the National Executive Committee of the Norwegian Heart and Lung Association. Most representatives of the regional organisation were not aware that it is possible to have a lack of alpha-1 antitrypsin, and the impacts of having this deficiency.

On 21 November, the leaders of Alpha-1 Norway and their sister associations in Sweden and Denmark gathered in Oslo, Norway. They were visited by Karen North from the Alpha-1 UK Support Group and Frank Willersinn from Alpha-1 Global. The purpose of the meeting was to bring together the work in the Nordic countries, and to establish a toolbox for treatment and follow up for alpha-1 patients.

Lovexair gets green light for study

The hospitals will now start to recruit patients for the study, which we will start in late autumn 2016 . The study will include a global education programme with pulmonary rehabilitation for patients and a follow-up service, along with a daily healthcare plan which will be managed through a mobile phone app and an educator support service.

The study aims to improve self-management in people with COPD, including adherence to treatment and quality of life, and is guided by a healthcare professional who is trained in managing lung conditions.

Earlier in the year, the Czech Civil Association Against Lung Diseases (COPN) changed from an organisation that produced and shared information on COPD to healthcare professionals and the general public, into a patient organisation focused on COPD, asthma, and different interstitial lung diseases.

The Hellenic Cystic Fibrosis (CF) Association has had a successful year of raising awareness of CF through activities organised as part of the ‘Each Breath’ campaign, including a spot on Greek TV, creating a short film starring patients, working on TV shows about a patient that received a second transplant, a photoshoot with a football team, and participation in the Athens Marathon.

Videos are available on most of these activities.

At the event, the Rosa Mar Award 2015 was given to Pablo Motos for his contribution to the fight against CF. Pablo has donated €270,000.00 of profits from sales of his book Famous phrases of children.

Professor Luciano Mutti, President of the Italian group for Research and Therapy in Mesothelioma (GIMe), spoke in Trieste, Italy in October at the conference on asbestos.

The conference provided information on national and international developments in medical, legal and environmental fields of pleural mesothelioma research, with the aim of helping and improving health of people with lung conditions.

The Madrileños Association of Asthmatics (ASMAMADRID) has organised several courses and workshops in December, with the aim of helping and improving the health of people with asthma and other lung conditions.

The first self-care training workshop to learn how to better manage asthma and prevent emergencies and hospital visits was held on 10 December in the Neighborhood Association PAU Ensanche de Vallecas.

The aim of the day was for families to learn more about the condition and to share experiences. A report on the day and the latest news on the UK based genome project  are available on the website.

The hidden cost of asthma report filed at Australian Parliament

On 24 November, 2015 the National Asthma Council Australia and Asthma Australia launched The Hidden Cost of Asthma report  at the national Parliament House.

The report was commissioned as part of the development of the National Asthma Strategy 2016-2020 to assess the scale of asthma’s economic impact on Australia.