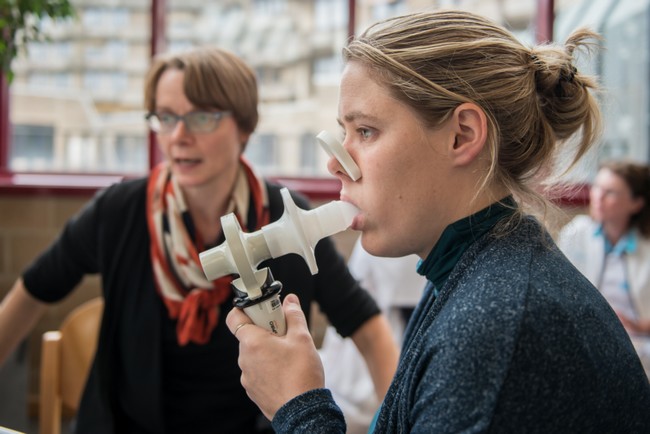 New resources for people with lung conditions in Spain

FENAER have also collaborated with a group of respiratory physiotherapists to produce a series of video tutorials.

Watch the videos [in Spanish].

Fundación Respiralia, the Spanish Cystic Fibrosis patient organisation, celebrated their Rose of the Sea Fiesta on 25 November. The Spanish National Transplant Organisation received the 2017 Rose of the Sea Award for their work in supporting people with cystic fibrosis.

In November, Fundación Respiralia and the Cystic Fibrosis Association of the Balearics organised storytelling sessions for children aged 6 to 8 years of age. Through the adventures of their mascot Respiralio, students learned what cystic fibrosis is, how to cough correctly, how to wash hands perfectly, and that they have to help those who have some limitations, either due to illness, injury or disability.

Over the last year, the National Association of Pulmonary Hypertension (PH) of Spain organised a range of activities to raise awareness of PH, including a charity race, a concert and collaborating in World PH Day activities. They also held the inaugural meeting of families with children with PH to share experiences and support on 18 November.

Events to raise awareness of sarcoidosis in Spain

The Can Parera Neighborhood Association of Montornés del Vallés town organised a solidarity event on 25 November to increase awareness of sarcoidosis – a rare lung disease – and raise funds for ANES (Spanish Sarcoidosis Association).

The Impro-Solidaria group organised another event on 10 December in Barcelona. There was a lot of entertainment activities for children, music, theatre, and dancing, and the opportunity to learn more about what it is like to live with sarcoidosis.

The highlight from 2017 for the Dutch Pulmonary Fibrosis Association was International Pulmonary Fibrosis week. The Association organised information meetings in nine hospitals, and more than 700 patients and their partners attended. During the meetings they launched the 2,000 extra steps per day project, inspired by the Irish Lung Fibrosis Association’s initiative. They gave every visitor a pedometer and information, in the hope that it would inspire people to walk more. As Hippocrates said, “walking is the best medicine”.

Belgian patient organization, COPD vzw, organised an information stand on World COPD Day, 15 November 2017 (pictured above). Members of the public had the opportunity to do free lung function tests, receive information about COPD, and talk with other people with COPD. Everyone was welcome: people with COPD, their families, their caregivers and supporters. The free lung function tests and smoking cessation advice were a great success.

COPD vzw were also pleased to collaborate with ELF to translate a factsheet on the benefits of quitting smoking into Flemish.

Raising awareness of pulmonary hypertension in the UK

November saw PHA UK run its second annual Pulmonary Hypertension Awareness Week, designed to help people understand more about PH. The campaign ran from 20– 26 November and put patient stories at the centre, using the hashtags #BreathlessNotVoiceless and #PHWeek17. It got a lot of people talking and resulted in widespread media coverage across the UK.

PHA UK also ended November on a high when its member magazine, Emphasis, won the gold award for ‘Best Publication’ at the CIPR Pride Awards for Yorkshire and Lincolnshire. Judges praised the magazine for delivering “informative and uplifting content which directly addresses the issues and concerns of those with PH”.

During 2017, the US Allergy & Asthma Network advanced its mission in outreach, education, advocacy and research. Highlights included screening over 5,000 patients at local events, public relations campaigns reaching over 2 billion people, and providing testimony to support policy priorities of access to affordable care and clean air.

The Network’s education materials reached over 1.5 million patients, while the USAsthma Summit and USAnaphylaxis Summit brought together over 300 patients to share experiences and discuss access to care.

The Global Allergy & Asthma Patient Platform advanced its mission and accelerated the vision of a world without allergies and asthma during 2017. Highlights included the annual scientific meeting with representatives from 11 countries; building organisational capacity to support patient organisations in emerging countries including Kenya and South Africa; and working alongside the WHO Global Alliance against Chronic Respiratory Diseases to address unmet needs.

Platform members participated in Global Skin 2017 to collaborate on unmet needs in atopic dermatitis, and also released global data on severe asthma impact and burden at the ERS International Congress in Milan.