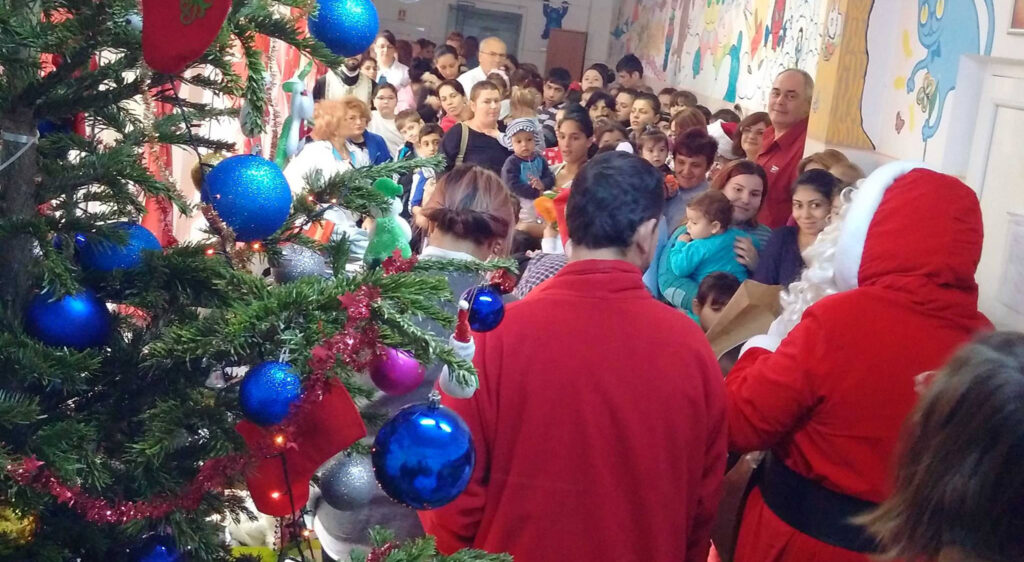 Picture: ARB-TB’s Christmas party for children being treated for tuberculosis at a hospital in Romania.

Read the report (in English).

At the end of December 2015, the European Federation of Allergy and Airways Diseases Patients’ Associations (EFA) had the opportunity to represent the myAirCoach project at the Drug Delivery to the Lungs Conference in Edinburgh, Scotland. The Aerosol society works to promote the science of particle distribution and its application in aerosols.

EFA also published a report, Harmonising Prevention and Other Measures for COPD Patients across Europe.

PHA Serbia, a new national patient organisation for people with pulmonary arterial hypertension (PH), which began work in September 2015, became a member of PHA Europe at the annual PH Conference in Barcelona in in the same month.

PHA Serbia has held several meetings with leading specialists in Serbia and an agreement for long term cooperation between PHA Serbia, the doctors and their clinics in Serbia was reached.

GIMe, the Italian mesothelioma group, was recently invited to speak at Cairo University, Egypt about medical research on asbestos-related cancers. Following this, a new collaboration was formed between Cairo University and the University of Salford, UK.

New report published on a future without tuberculosis

TB Alert, a UK-based organisation with a worldwide scope, has just published their annual report, For a Future without Tuberculosis.

School of Sarcoidosis meetings in Italy

Friends against Sarcoidosis Italy (ACSI), the Italian Sarcoidosis patient organisation, organised their 7th meeting on 20 February, 2016. The meeting, ’School for Sarcoidosis’,  aimed to educate and inform patients, families and healthcare professionals, as well as offer counselling.

ACSI was pleased that the meeting was supported and attended by some of Italy’s leading sarcoidosis medical specialists.

To mark World COPD Day at the end of 2015, the Romanian Pulmonology Society organised a two day free lung function testing event in Bucharest with the theme “Do you know how old your lungs are?”

886 people had their lungs tested, and 264 of those were diagnosed with COPD.

Pulmonary Hypertension – Ukrainian Rare Diseases Association (PHURDA) and the charity Sister Dalila are organising a training and information event in Lviv city centre at the end of February.

The event is part of Lviv’s ’Responsible City’ campaign. The event will give information and training to 50 volunteers on the early diagnosis and detection of pulmonary hypertension.

Read more (in Spanish and English).

Collaboration to help children with TB in Romania

In December last year ARB-TB, the Romanian TB association, continued their ‘Living together, breathing together’ campaign and organised a Christmas party for 50 children from a TB hospital.

The association is also continuing its long-term collaboration with a hospital, in which they will  organise creative and educational events for the children being treated for TB there.

In addition, ARB-TB’s  latest project, Kids Help Kids, is a collaboration with two schools in Bucharest.

Lymphangioleiomyomatosis (LAM) Support Ireland is targeting hospitals this month to raise awareness of the rare condition to mark Rare Disease Day 2016 on 29 February. They will leave their information materials in hospital departments where lung function tests are carried out.

‘Three men in a robin’ fundraising for asbestos victims in Merseyside

A Robin, also called a Reliant Robin, is a car with three wheels. In July 2015, three men from Merseyside, UK decided to complete the Mongol Rally in their Reliant Robin, driving over 11,000 miles to raise money for the Merseyside Asbestos Victim Support Group. They raised £5,997 for the association, which is a huge amount for the small organisation.

On 15 October, 2015, the Helping Hands Foundation in Pakistan celebrated World Hand Washing Day under the slogan ’Raise a Hand for Hygiene’. The event was organised to raise awareness of the importance of hand washing for the health and wellbeing of people.

The National Asthma Council of Australia published a new blog which gives details of the latest research on the effect of dairy products on people with asthma and dispels the myth that milk is bad for people with the condition.

Read the blog (in English).