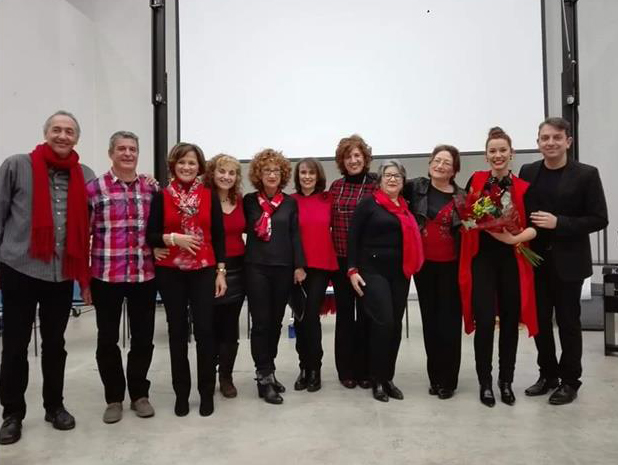 Patient organisations have had a busy month or so: celebrating policy successes, cheering up children in hospital with TB over Christmas, and setting up a choir to improve the wellbeing of people with asthma.

Picture: members of the ASMAMADRID choir

Landmark ban of smoky coal in Ireland, the first of its kind in Europe

Following years of campaigning, the Asthma Society of Ireland welcomed a nationwide smoky coal ban, the first national ban of its kind within the EU. It is estimated that nearly 2,000 lives are lost on the island of Ireland each year due to smoky coal pollution. While people with asthma and other lung conditions are worst affected, this ban will benefit everyone by reducing coal ash production, a source of exposure to arsenic and other health-damaging metals.

In 2017 the Malta Health Network (MHN) celebrated its 10th anniversary. MHN is an independent, voluntary body, that was set up in 2007, to represent 30 patient, carer and professional organisations at the national, EU and international level. The MHN has been active in promoting the European Charter of Patients’ Rights. In June 2017, the MHN, together with the No Pain Foundation, successfully hosted 300 international delegates attending the 2017 Societal Impact of Pain Symposium in Malta.

Most recently, MHN organised two training events as part of its celebration for Patient Solidarity Day inspired by the theme of ‘Patient Empowerment Through Knowledge.’ The events offered introductory training to the European Patient Ambassador Programme (EPAP). Thanks to networking and local fundraising opportunities, MHN was able to organise these introductory sessions for people in Malta and had a very positive response from all 35 participants.

In December during the winter holidays, the Romanian TB Patients Association (ARB-TB) staff and volunteers visited children in the tuberculosis sanatoriums in the country. The theme was “let’s colour the winter holidays”. They gave the children sweets, toys, and did drawing and painting activities where the children had to describe their world or what they want. They hope this will make it easier for the children to understand, and help them to regain their smiles.

The Macedonia Cystic Fibrosis Association (MCFA) hosted the South Eastern European Cystic Fibrosis Conference in Skopje, Macedonia. The conference was very successful, with 14 international speakers, including Dr Milan Macek as chairman on the Rare Disease Roundtable and Mrs Vlasta Zmazek from EURORDIS, to discuss the treatment of rare conditions.

Patient and professional representatives from CF Europe and the European Cystic Fibrosis Society attended, along with over 200 participants from 17 different countries. Representatives from the Macedonian National Health Insurance Fund and Ombudsman also participated in the roundtable discussions.

Members of the French Federation of Respiratory Associations (FFAAIR) participated in an information and training event in Paris. Supported by the European Federation of Allergy and Airways Diseases Patients’ Associations (EFA), the presidents of 15 associations from different regions of France discussed a range of topics including mass media campaigns, how to build relationships with patients and volunteers, physical activity projects, smoking cessation, and patient experts.

French patient associations, FFAAIR and health professional groups, supported by a group of parliamentarians, recently presented a White Paper titled: “Make COPD a public health emergency for the five year period”. The paper highlights the devastating impacts of this condition in France and calls on the government to develop a 5-year emergency action plan against COPD.

The Dutch sarcoidosis organisation Sarcoidose Belangenvereniging Nederland recently changed their name to Sarcoidose.nl. In December, the organisation completed their 2018 year plan and launched a new strategy for the coming years. Their new motto is: Verbinden, Inspireren, Motiveren (To connect, inspire and motivate).

Awareness campaign for pulmonary fibrosis in the Netherlands

In the final week of 2017, the Dutch Pulmonary Fibrosis Society launched a video to raise awareness of pulmonary fibrosis. The video tells the story of a woman who is concerned about her father who has been coughing and short of breath for a long time. The campaign helps members of the public to recognise the symptoms of pulmonary fibrosis and encourages them to visit a healthcare professional. Within the first month, the video has already reached over 100,000 people.

View the video and read more about the campaign [in Dutch].

2017 highlights from the Czech Alliance against Chronic Respiratory Diseases

During 2017, the Czech Alliance against Chronic Respiratory Diseases (CARO) organised a memorial meeting with senators, presidents of several medical societies and representatives of the Czech Ministry of Health to raise the profile of lung health. They also campaigned for a new law against smoking. CARO celebrated its 10 year anniversary with a visit from Professor Nikolai Khaltaev, president of the Global Alliance against Chronic Respiratory Diseases (GARD).

The Spanish Foundation against Pulmonary Hypertension (FCHP) recently invested €50,000 into pulmonary hypertension research, bringing their total donation amount to over €200,000. One example of research is the Empathy Project, led by the Spanish biomedical research network, which aims to improve early diagnosis of PH and identify new treatments.

The Foundation ended the year by celebrating the appointment of two new patrons, Sonia González and her husband Emilio Butragueno, Director of Institutional Relations for FC Real Madrid. Both are long-time supporters of the Foundation.

ASMAMADRID sings with its patients

The Association of Asthmatics from Madrid, ASMAMADRID, is developing a project that links singing and music therapy to the lung health and general wellbeing of people with lung conditions. Thanks to a range of breathing and vocal exercises, participants have been able to achieve greater lung capacity to use in their daily lives, as well as in the choir. The 1st Workshop of Vocal Technique and Choral Singing was supported by VitalAire, the Spanish Respiratory Society (SEPAR) and the Institute for Patient Experience (IEXP), who are helping the project to continue.

On 15 January, the 2nd Workshop of Vocal Technique and Choral Singing began, open to anyone with or without a lung condition. With the participants, ASMAMADRID will form its new choir, “CORO ASMAMADRID”.

The Spanish association for pulmonary hypertension (PH) sold all their Christmas lottery tickets. This is one of the most important events of the year to raise funds for the organisation. The money raised will be used to improve the lives of people with PH and their families.

In December, Fundación Respiralia continued their awareness campaign for cystic fibrosis. They organised a Christmas card contest and storytelling session for children aged 6 to 9, in partnership with the supermarket group Alcampo. Through the adventures of their mascot Respiralio, students learned what cystic fibrosis is, how to cough correctly, how to wash their hands perfectly, and that they should help those who have limitations, either due to illness, injury or disability.

New service for people with primary ciliary dyskinesia in the UK

The UK PCD Family Support Group is delighted to announce a new service for adults with PCD from 1 April, 2018 which will be provided by the UK National Health Service (NHS). Thanks to the persistent lobbying over many months of their Chair Fiona Copeland, the new service will follow on from the excellent PCD Diagnostic and Paediatric Management Service for this rare genetic lung condition. The PCD Family Support Group is looking forward to working with the NHS to set up the service across the UK, and to seeing the results for adults affected by PCD.

EU-IPFF is happy to welcome three new members to the group: the IPF Polish Society, IPF Bulgaria and Respira Portugal. The new members joined EU-IPFF in November 2017, following approval at the General Assembly in Barcelona, and will be represented by Piotr Radwan-Rohrenschef, Radostina Getova and José Duarte Coelho Albino, respectively.

EU-IPFF is also pleased to announce that Elena Gentile, Member of the European Parliament, has been awarded with the EURORDIS policymaker award this year for supporting the cause of people living with rare conditions, and IPF in particular.

Elena’s dedicated work over the last few years has given a voice to the IPF community. Her commitment to putting IPF on the European agenda gives hope to people with IPF and their families, who are fighting to find the cause of the condition and a cure for it.

Cancer Biomarkers in the Era of Personalised Medicines event

The European Cancer Patient Coalition (ECPC), in collaboration with Marlene Mizzi MEP organised an event on 5 December, 2017, on the topic of ‘Cancer Biomarkers in the Era of Personalised Medicines’. The event gathered a range of stakeholders and presented perspectives of patients, doctors, researchers and industry on the importance of cancer biomarkers, and the ECPC made a three-point call for action.