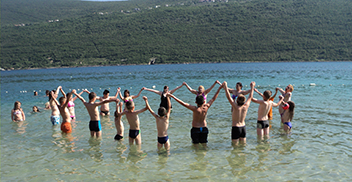 VAINCRE, the Belgian patient organisation for lung cancer, took part in an important event, organised by the European Respiratory Society, in Brussels last month. The event was a high-level roundtable discussion on lung cancer chaired by Professor Phillippe Juvin MEP. It was aimed at discussing strategies for how to improve lung cancer prevention, treatment and management at a research and management level. Mogens Ekelund of Lung Cancer Europe (LuCE) was also among the attendees at the event.

The 10th Annual meeting of Cystic Fibrosis (CF) Europe, the European federation of patient organisations, representing over 40,000 people with CF in 40 countries, was held together with the 38th European CF Conference in Brussels on 9–13 June, 2015. Representatives of the CF community, healthcare professionals, researchers, patient representatives and industry came together to share their knowledge and discuss advances in research, treatment and optimal care.

Call to involve patients to reduce the burden of allergy

The European Federation of Allergy and Airways Diseases Patients’ Associations (EFA) presented its vision of joining healthcare professionals, patients and industry leaders in the fight against allergy at the 2015 Annual European Academy of Allergy and Clinical Immunology Congress in Barcelona in June. EFA stresses that this would be the best way to reduce the burden of allergy and of efficient allergy prevention for the future.

Fundacion Respiralia had a great June:

Anemona, the Serbian asthma and chronic obstructive pulmonary disease (COPD) association enabled 18 children with asthma to enjoy a 10-day holiday by the sea at Kumbor, Montenegro. The holiday aimed to improve the health of the children, and included sessions where healthcare professionals demonstrated breathing exercises in the water.

Phillippe Poncett, who has COPD, took the cyling challenge at the French federation of associations for people with respiratory conditions, (FFAAIR) Congress in Grenoble on 5–7 June, 2015. He achieved the record speed of 200m in 15 seconds on a bike with an oxygen concentrator at the Grenoble stadium.

The Primary Ciliary Dyskinesia Family Support UK group held their Annual Meeting and Family Day on 6 June, 2015 in Milton Keynes. It was a great opportunity for people with PCD and their carers to learn more about the condition and meet other families also affected by it. This year saw the biggest attendance ever, with 69 adults and 23 children.