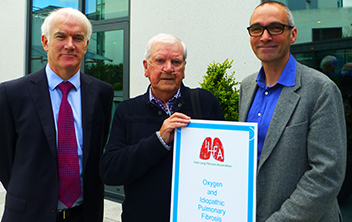 The European Federation of Allergies and Airways Diseases Patients’ Associations (EFA) has conducted a survey among 19 European countries to map the public authorities responsible for policies affecting people with COPD, including smoking cessation programmes. The resulting report, ‘Harmonising prevention and other measures for COPD patients across Europe’, shows important inequalities among European countries regarding the existence of support programmes, counselling and reimbursement of therapies.

Read the report or read more on the website (in English).

The Polish Federation of Patients with Asthma, Allergies and COPD celebrated World Asthma Day on 5 May to increase awareness of asthma and related issues of care and treatment. The theme this year was asthma control.

The Federation also presented a report, entitled “Severe asthma – the situation for Polish patients” at a conference on severe asthma during May in Warsaw. Patient representatives were also invited to hear the report.

You can read the full report or go to the website (in Polish).

Asmamadrid also marked World Asthma Day by organising a workshop on improving the control of asthma and allergy. The well-attended workshop was aimed at families with children affected by asthma and was a successful awareness-raising event.

Serbian children with asthma to go on seaside holiday

Anemona, the Serbian Asthma and COPC Association, is funding 18 places for children with asthma to go to the small town of Kumbor in Montenegro by the Adriatic Sea. The children will be going on their holiday for 10 days in June and Anemona hopes that breathing the fresh sea air will improve their asthma.

The Irish Lung Fibrosis Assocation launched a new patient information leaflet at their patient information day in May (pictured above). The leaflet, entitled ‘Oxygen and Idiopathic Pulmonary Fibrosis’, gives patients and their carers an overview of the different aspects of using oxygen. It talks about how oxygen can improve breathlessness and gives practical advice for exercising with oxygen, travelling, and what to do if there is an electrical power cut.

Respira, the Portuguese patient organisation for chronic obstructive pulmonary disease (COPD) and other chronic lung conditions, organised an activity to mark World No Tobacco Day (celebrated 31 May) in association with the Portuguese Pneumology Society in the city of Braga to raise awareness of COPD. Helped by a group of young volunteers from a local charity, Respira invited pilgrims to the site of Bom Jesus de Braga to climb steps while wearing a clip on their nose. The small exercise was used to show how difficult it feels for people with COPD to do their everyday activities. The event was published in several newspapers and was mentioned in a national TV programme.

FENAER, the Spanish asthma organisation, and the Spanish Thoracic Scientific Society jointly presented their Spanish guide to asthma management to scientific societies. FENAER had played a major role in writing and editing the guide, and giving the patient perspective in the guide, which is aimed at healthcare professionals

Also, to celebrate World Asthma Day, FENAER organised a Walk to Breathe in Malaga on the promenade to raise awareness of the condition. This was followed by a fitness session to demonstrate the importance of fitness for people of all ages and its role for lung health.

Respiralia organised their 16th swimming tour around the island of Formentera, south of Ibiza. Swimmers had to swim around the whole island without stopping. This activity was organised to raise money to improve the quality of life for children and young people with cystic fibrosis, and to raise awareness of the condition across the country.

Read more (in Spanish and English).