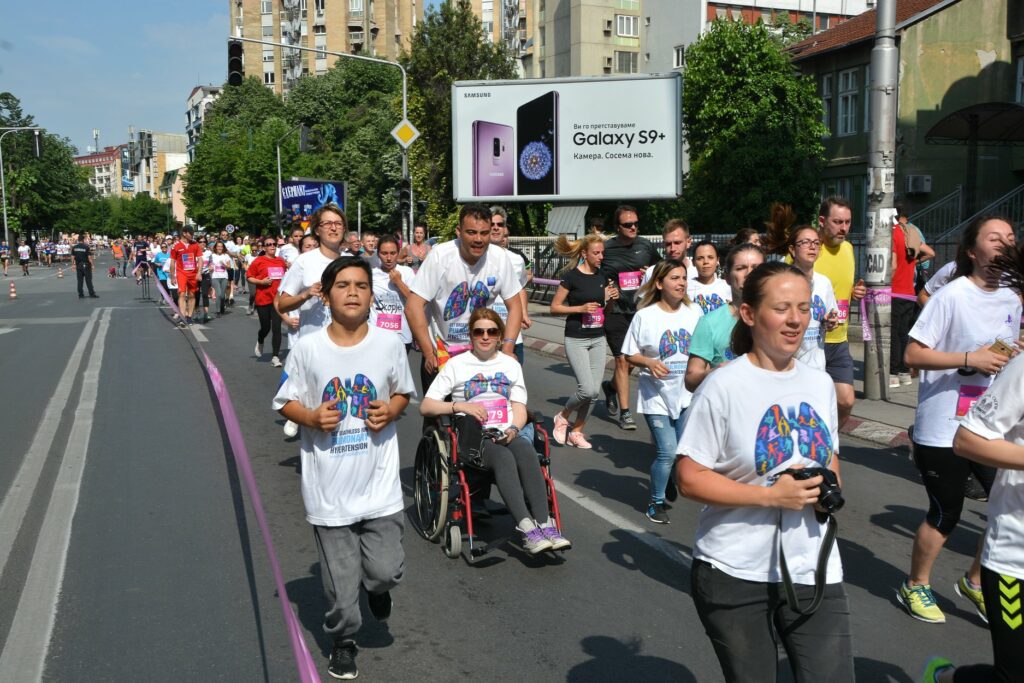 June has been an extremely busy month for patient organisations throughout Europe and beyond. Find out what they have been getting up to in the summary below.

Picture: Todor Mangarov, President of PH Bulgaria pushing the wheelchair of Gjurgica Kjaeva. Todor is a PH patient who has had surgery and Gjurgica is an idiopathic PH patient from Macedonia. They finished the 5km race for a second time.

The Bulgarian team came home from the European Heart and Lung Transplant Championships, recently held in Italy, with 13 medals. For the first time, the Bulgarian team included a female athlete. Irene Dikova won a gold medal in tennis and a silver in table tennis.

Irene had a double lung transplant in 2017 and has always had an interest in sports: “After the transplantation was done, during the third month I was already active, although in the beginning I had to be more careful. There was  a lot of pain going through such a transplant, but if you have a strong spirit, and your parents support you and your friends help you, things get much easier.”

Irene is one of the founding members of the Bulgarian association of patients with respiratory failure and lung transplantation. She dedicated her gold medal to the doctor who carried out her surgery, Professor Klepetko, and his team, and also to her donor.

Sporting event to raise awareness of pulmonary hypertension in Macedonia

For World Pulmonary Hypertension (PH) day, in collaboration with PH Europe, APH “Moment Plus” Macedonia took part in the Wizz Air Skopje Marathon. This year there were 10,000 participants from 58 countries, including people with PH who have had lung surgery. The event helped to highlight the importance of early diagnosis and treatment for PH and demonstrate that patients can continue to have a good quality of life.

During Worldwide LAM Awareness Month, LAM Academy Sweden arranged a second gathering in Stockholm for people with LAM and the relatives. In addition the LAM doctor Maryam Fathi PhD and Professor Gunnar Norstedt participated. This gave attendees the opportunity to share experiences and ask questions about LAM, and also to support others with a LAM diagnosis and their families.

The Lovexair Foundation, in collaboration with sponsors, organised the first Nordic walking “Breathe for Life” event. More than 100 people participated in the Seville event, helping to raise awareness among people with asthma, chronic obstructive pulmonary disease (COPD) or other lung conditions of the importance of leading a healthy life, exercising and using inhalers correctly.

New video for children with asthma

Find out more and watch the video [in Spanish].

This year the Asthma Society of Ireland carried out a study into asthma attacks and how much people really understand about them. The study showed that there was very little knowledge and in response the Society themed its events for World Asthma Day around understanding the symptoms of an asthma attack and knowing what to do in the event of one. The Society launched a series of videos to help people recognise and take action during an asthma attack:

Find out more about the asthma attack study.

On 18 June the AsmaMadrid Choir hosted a concert. The Choir was set up in 2017 as a result of a workshop on vocal technique and choral singing, taught by the professor and music therapist Helena Alonso. In recognition of the success, AsmaMadrid were awarded 1st prize of the first Spanish Society of Pneumology and Thoracic Surgery (SEPAR) Patients Congress and the Vital Air Patients Aid award. The organisation is currently seeking new supporters to help continue the project.

Since 2013, the patient organisation AMA Fuori dal Buio and the Centre for Rare Lung Diseases of the University Hospital of Modena have offered support groups for people with idiopathic pulmonary fibrosis (IPF) and their families. During the monthly meetings, participants have the opportunity to tell their stories and exchange experiences on the daily management of their life with the condition, access to services and facilities provided for people with IPF. In 2015 the group conducted a study to evaluate the beneficial effects of participation in the support group. The study, which has recently been published in a scientific journal, found that after 6 months participants experience benefits in their levels of anxiety, depression, positivity, sense of control, general health and vitality.

The second #FitnessForBreath initiative began with events in different Italian cities. Achille Abbondanza, who has IPF, participated in a series of bicycle races in order to raise awareness of IPF and to show that physical activity can help, even if you are affected by a serious rare condition. #FitnessForBreath will carry on throughout the year across Italy, with patient organisations hosting events related to sport and physical activity.

The Aspergillosis Trust is a patient and carers’ advocacy group which has recently been set up to spread awareness about this condition and fundraise for the Fungal Infection Trust. During the past month letters have been sent out for potential patrons and requesting selfies from supporters holding publicity cards to post on social media and the website. The Trust has had some success, it now has two patrons and some photos from supporters.

Women Against Lung Cancer Europe has launched a new booklet on family planning and maternity experiences of people with cancer. The booklet is aimed at healthcare professionals, women and men considering having children following a cancer diagnosis. “Un giorno saprai – One day you will know” adapts four real-life stories, offering a double point of view; that of the woman who has chosen to be a mother after/in spite of the disease and the view of the doctor who supported her. The book also provides medical and regulatory insights on the topics of fertility, family planning and adoption during and after cancer, written by specialists and lawyers.

On 6 June, the Paediatric Lung Association Pakistan hosted a seminar to highlight important issues related to tuberculosis (TB), including prevention and management. They also aimed to motivate the community to report all TB cases and ensure cooperation with healthcare professionals.