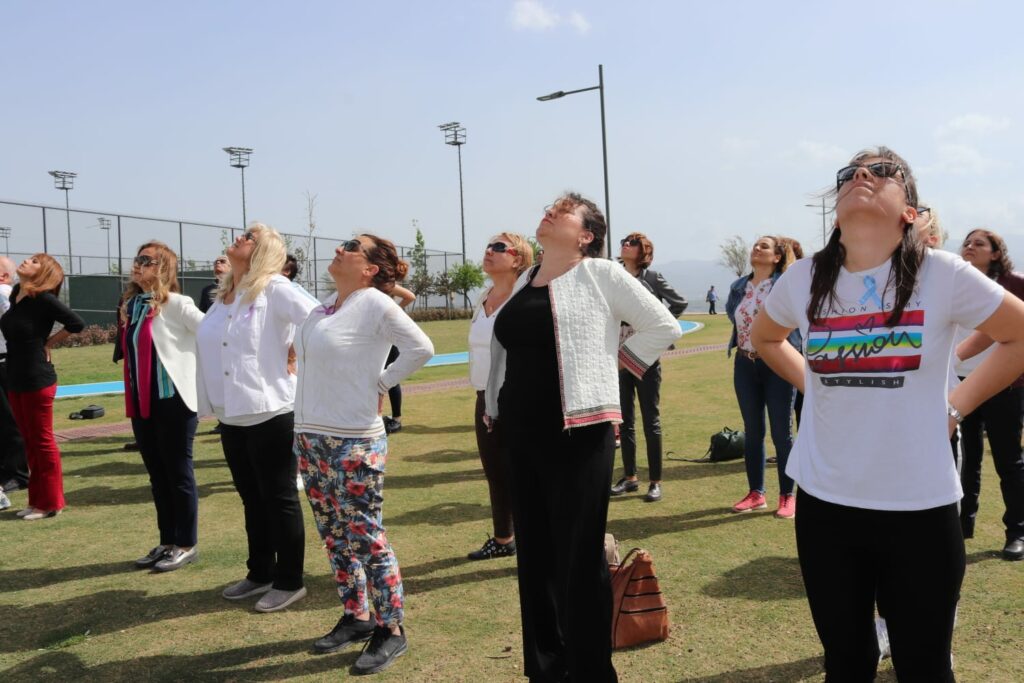 This month patient organisations around the world have been taking part in awareness days, holding conferences and meetings, and organising fundraising activities to support people living with lung conditions.

In honour of World Asthma Day and Asthma Awareness Month, the Asthma and Allergy Network, along with over 20 other Global Allergy & Asthma Patient Platform (GAAPP) member organisations got involved with the “Define Your Asthma Rights” campaign, aiming to increase knowledge of asthma and severe asthma and improve access to care for patients.

Learn more about the campaign

As an active member of GAAPP, the Respiriamo Insieme Onlus association is also taking part in the “Define your asthma rights” campaign from 1 May until 15 June.

For World Asthma Day, volunteers of Respiriamo Insieme met with members of the public, patients and caregivers at the Hospital of Villafranca di Verona to carry out lung function (spirometry) tests and consultations. They also provided information and educational materials.

Fundación Lovexair pedals away for asthma and COPD

As part of Lovexair’s “Respirar es vida” (Breathing is life) campaign and coinciding with World Asthma Day, the Lovexair Foundation organised a programme on physical activity and lung health called “Pedal away for Asthma & COPD”. The first event was held in Hospital de la Santa Creu and Sant Pau in Barcelona, where there was a static bike. The more people pedalled, the more support they secured for asthma and COPD patients in 2020.

The Pakistani Paediatric Lung Association got involved with World Asthma Day by talking to children and parents about asthma and ways to prevent and treat the condition. The association held seminars and focus groups, and carried out lung function (spirometry) tests on children to give them a better understanding of lung health.

For World Pulmonary Hypertension Day, the BSPPH team organised a “Light in blue” initiative. Emblematic buildings across Bulgarian cities were illuminated, including the National Palace of Culture (the biggest convention centre in Bulgaria). Because BSPPH was able to work with seven municipalities and the local media, over 1 million Bulgarian citizens gained a better understanding of the problems related to pulmonary hypertension. Six municipalities got involved for free, demonstrating how successful a campaign can be with a limited budget.

As part of World PH Day, PAHSSC organised several events to raise awareness of pulmonary hypertension in different cities across Turkey. A series of #nefesepahabiçilmez (breathing is priceless) activities were carried out in five cities, including breathing exercises with physiotherapists and the ‘breathing through a straw’ challenge. In the evening, all the bridges connecting Asia and Europe were lit up in purple. Some municipalities put up billboards about pulmonary hypertension and a well-known electronics store displayed information on TV screens in all their branches.

More information about the congress

The Spanish Alpha-1 association celebrated the second European Alpha-1 Awareness Day by placing information points in 20 hospitals across Spain, highlighting the importance of early diagnosis and knowledge dissemination across Europe.

Alpha-1 Germany held an information day for healthcare providers. This was a huge success as it brought new insights into Alpha-1 antitrypsin deficiency. A number of well-known speakers, including the President of the European Respiratory Society (ERS) Prof. Tobias Welte covered various topics such as infections, vaccination, lung function decline, liver problems and rehabilitation.

You can read the detailed reports and summaries in Alpha-1 Germany’s summer journal, which will be published in July.

Other conferences and meetings

At the General Assembly some positive points were highlighted, such as the growing demand to take part in operations for health prevention, presence at the ELF/ERS Healthy Lungs for Life event and the ELF Patient Organisation Networking Day at the ERS International Congress in Paris, 2018.

FFC recently brought together volunteers and supporters of the foundation from across Italy for its annual meeting. 200 delegates met at the event, which included a scientific session to learn about some of the key advances in cystic fibrosis research.

During the meeting FFC presented its first social report: a document that gives an overview of the actions carried out by the FFC community of over 900 researchers, 10 thousand volunteers (including patients and their family members), donors and staff members.

More information about the meeting.

FENAER will hold its first free online congress on 8 June in Spanish and English. The event is for people living with allergy and respiratory disease, their family members and healthcare professionals to share experiences and knowledge. It will be broadcasted live in several Spanish cities.

More information about the Congress.

On 17 May, over 120 people attended the Dutch Pulmonary Fibrosis Society’s annual meeting designed for people living with lung fibrosis and their family members and caregivers. The meeting aimed to inform patients about care, treatment, medical trials and ways to manage their condition.

The LAM Academy Sweden gets visits from medical specialists

The Swedish LAM Academy and TSC-Sweden were recently visited by various medical specialists in these rare lung conditions. They gave talks for doctors and healthcare providers and then for patients and their family members and friends.  Swedish healthcare providers also took part in special consultations.

The XX Swimming Tour around Formentera is designed to raise awareness of cystic fibrosis and raise funds for the “Education equals Health in Cystic Fibrosis” programme. It has become a highly recognised fundraising event among swimmers from all over the world.

The Respiralia Foundation has recently joined the Botin Foundation’s prestigious “Solidary Talent Network”, an exclusive network of organisations across Spain where each year, 12-16 organisations can benefit from specialized training and financial support.

Aspergillosis Trust (AT) gets active in fundraising events

The Aspergillosis Trust (AT) is strengthening awareness and raising funds to help support people affected by aspergillosis. Co-founder of AT, Sandra Hicks, raised money for the organisation through her birthday fundraiser. A team of three are training for their long cycle from Lands End to John O’Groats to raise money for AT and the Vine Trust. Yvonne Gibson is getting ready for her big skydive to raise money for AT and Brain Tumours in memory of her husband.