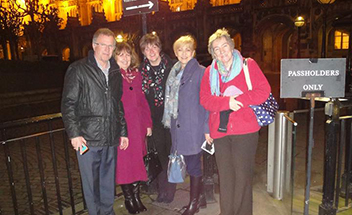 Inspira Vida is a new patient organisation for people with asthma in Serbia and it has recently launched its website. The website is particularly important, as it is the only platform available to all Serbo-Croat and Bosnian speakers in the region of the former Yugoslavia. The new website gives people in Serbia and the wider regions access to the best known experts in lung diseases in their country.

Inspira Vida has set its aims high – the organisation is planning to release a short-film introduction to using inhalers and they want to establish and grow a network of patient organisations dealing with lung conditions in Serbia.

Read more (in Serbo-Croat and Bosnian).

The Irish Cancer Society and nine children’s charities in Ireland have issued a press release in reaction to threats made by tobacco companies fighting the introduction of plain cigarette packaging.

You can read the press release on the website.

On 23 January, 2015, the European Federation of Asthma and Allergy Associations (EFA) participated in a national symposium on “Allergies and the environment: their impact on health and education”, organised by the French Association for Health Prevention at School and University (AFPSSU) in Paris. The event brought together experts from all over France to present and discuss the effects that polluted, crowded and allergenic environments can have on children and students.

EFA was honoured to co-present a discussion on the latest environmental and health policy developments within the EU institutions with its member, Asthma and Allergies, and to participate in a panel explaining the patient perspective at a European level.

For more information on EFA’s presentation go to the website.

On 25 February, 2015, the UK Primary Ciliary Dyskinesia (PCD) family support group went to the UK Houses of Parliament to celebrate Rare Disease Day. It was a good opportunity to learn more about the UK’s strategy for rare diseases and to meet other people affected by rare conditions.

Croatian Alliance for Rare Diseases hugs to mark the day

The Croatian Alliance for Rare Diseases marked Rare Disease Day this year with a range of different activities. One of them was their campaign “Hug for Rare Diseases” where people sent in photos of giving and receiving hugs for the organisation’s website and Facebook page.

The organisation also made the first documentary on rare diseases “Day by Day” last year with real life stories of patients and family members, but also with opinions of experts from Croatia and other countries. The premiere of the documentary was held in Zagreb, on 27th of February 2015 and also some smaller premieres in other cities of Croatia: Dubrovnik, Split, Osijek and Rijeka. The movie will also be available with English subtitles at some point in the future.

Respiralia keeps up the exercise

Respiralia has started 2015 by continuing with a series of sporting activities. Here are some examples:

Mahon sports club raised 170,000 euros through their “Lo Esport Som Solidaris” campaign, which they donated generously to Respiralia. 203 people took part in the first urban orienteering event against cystic fibrosis in Palma earlier in the year, and on 24 January, 2015, 31 adults and 19 children took part in a Zumba masterclass event at the Respiralia headquarters, also in Palma.

FENAER welcomes “On your own step by step”

FENAER in Spain is welcoming the draft for “On your own step by step” – a walking programme for patients with chronic lung conditions. The programme offers walking as part of home-based lung health therapy and is promoted by the Spanish Society of Pneumology and Thoracic Surgery. It is aimed to encourage people with chronic lung conditions to walk, as walking is something that most of us do anyway.

The Sleep Apnoea Trust in the UK has launched a campaign for fast-track medical treatment for people with obstructive sleep apnoea syndrome (OSAS) who drive as their job.

The campaign aims to raise awareness of the condition and calls on the Department of Health to issue clinical guidance to clinical commissioning groups, hospitals and healthcare professionals to speed up the treatment for vocational drivers affected by the condition. This is to enable them to drive again within a maximum of 4 weeks of their first referral, so that they will not lose their driving license for their employment.

Asmamadrid is supporting a range of health and health education initiatives, including sports and outdoor activities. These include therapeutic singing practice, chest physiotherapy aimed at people with lung conditions and especially chronic obstructive pulmonary disease (COPD), inhaler management, and their Ministry of Health-accredited workshops for healthcare professionals working with asthma.

Respira celebrated their 8th anniversary on 9 February. To mark the occasion, they created a Facebook page.

To start the New Year Anemone, a patient organisation for people with asthma and COPD in Serbia, organised events for their youngest members – Father Christmas came and gave presents to children with asthma, donated generously by local business.  The organisation currently has about child 500 members.