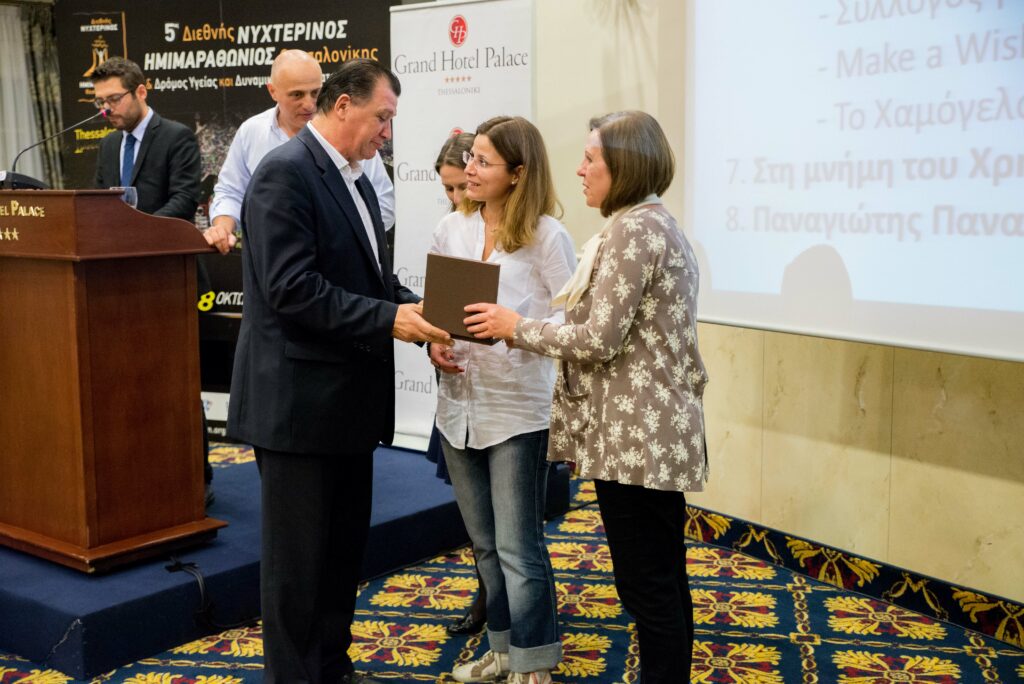 In the last few months, patient organisations across Europe – and beyond – have been working hard to promote better lung health. Here is a selection of their recent activities.

Photo: The Association for Cystic Fibrosis Greece receive an award for their contribution to the Thessaloniki Night Half Marathon

The European Cystic Fibrosis (CF) Young Investigator meeting was initiated 10 years ago as a joint French-German event. Now patient organisations from France, Belgium, The Netherlands, Germany and Italy are involved.

The 10th anniversary meeting started with an impressive talk by Ulrike Pypops, who has CF herself, followed by a presentation from a young investigator on his CF research career.

New patient association for people with lung conditions in Turkey

Turkish members of the European Respiratory Society (ERS) have founded the Association for Patients with Lung Disease (APLD). The organisation is in the initial stage of establishing itself, and is making contact with people affected by lung conditions and other organisations in Turkey.

As soon as their website is live, the APLD will be added to our patient organisation network.

The European Federation of Asthma and Allergy Associations (EFA) reports that since February several representatives from the Advisory Patient Forum for myAirCoach have been more intensively involved in the different activities of the project, such as the development of an asthma management digital trainer, testing, prototype design, tailored device models and promotion. The patients’ views will benefit researchers immediately, instead of receiving patient feedback afterwards as is common in research.

1. A risk calculator where anyone can find out the risk factors and symptoms of lung cancer

2. Promotion ofthe  iCoach App – a guide for quitting smoking and part of a European Comission campaign

3. A partnership with Băneasa Trail Run, a competition that was held on the 13 December, 2015 with more than 1,000 runners supporting a healthy way of living.

Change of attitude for people with cystic fibrosis in Spain

The Respiralia Foundation’s  personalised fitness programme  for children and young people with CF, pioneered in Spain, has helped the people taking part to stop focusing on their limitations related to their condition and to think about the challenges they can set themselves. This change has improved their quality of life and, very importantly, resulted in better social integration.

The Association for Cystic Fibrosis Greece had the largest number of participants at the recent Night Half Marathon in Thessaloniki. Over 320 people ran for the organisation, raising awareness of the condition.

The association also organised a two day physiotherapy course in February in Thessaloniki with the support of the International Physiotherapy Group/Cystic Fibrosis. Physiotherapists from all over Greece and neighbouring countries, such as Serbia, attended to share their knowledge and best practice.

The Irish Cancer Society has developed a new online tool – the lung cancer checker. This is to raise awareness of the condition in Ireland, which could contribute to much earlier detection rates. The society has also developed infographics for people to use.

The Macedonian Association for Pulmonary Hypertension,  Moment Plus,  helped raise awareness of the condition through a number of activities for Rare Disease Day 2016 in the towns of Bitola, Ohrid, Gevgelia and Skopje.

Among the activities were a flash mob of children and teenagers dancing for rare diseases; a press conference discussing a national strategy for rare diseases; and a TV interview with Gjurgica Kjaeva, chairperson of Moment Plus, about pulmonary hypertension.

Congress for rare conditions in Ukraine

Pulmonary Hypertension Association (PHA) Ukraine together with Rare Diseases Ukraine held their national congress for people with rare conditions in February. The congress was attended by international participants, including Juan Fuertes, Director of the Pulmonary Hypertension Association (PHA) Europe, who gave a presentation about advocating for rare conditions in Europe.

Watch a video (in Ukranian).

The Pakistan paediatric association pulmonary group held a seminar on Rare Disease Day at Nishter Hospital, Multan for to mark the importance of the day.