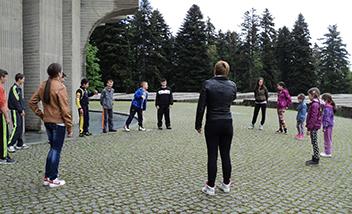 200 Alpha-1 scientists, clinicians, experts, patients, caregivers and families as well as industry partners from 26 countries met in Italy on 9-11 April for the 5th Alpha-1 Global Patient Congress. They met to discuss the latest research, the regulatory framework for licensing therapies for rare diseases in Europe, the status of patient registries and ways to strengthen the Alpha-1 message globally.

Spa day for children with asthma on World Asthma Day

Anemona in Serbia decided to mark World Asthma Day differently this year. Instead of their usual annual spirometry event, they took 15 children with asthma to Kozara mountain air spa, where they spent the day in the fresh, clean air doing breathing exercises.

The Hellenic Cystic Fibrosis Association organised a free 3-day conference taking place on 8 and 9 May in Thessaloniki, and on 10 May in Athens.

The conference was organised with Greek and UK healthcare professionals specialising in cystic fibrosis, and in collaboration with the Northern Greece Association of Parents and Guardians of CF Patients. It included interactive sessions on topics such as physiotherapy and nutrition for patients to take part in.

The short film ‘Alisha’s story’, one of a series of eight British award-winning short films, tells of the daily struggles of a young girl with asthma. The film was introduced at the Croatian Festival of Tolerance by the president of the Association of Parents of Asthmatic Children in Zagreb. The film is being used by schools in Croatia as an educational tool.

TBnet, an international organisation uniting tuberculosis (TB) specialists from all over the world, organised their Walk Against TB in Moldova on 6 May to show the human face of the condition. The walk had different stages, including one where the participants walked with face masks on, showing how hard it is to breathe, especially going uphill. All stages were supported by medical students to discuss at-risk groups, diagnosis, treatments and adverse effects with people taking part.

Respiralia organised a number of events all over Spain to celebrate National Cystic Fibrosis Day on 22 April. The events included a soap bubble campaign, awareness raising on high calorie menus for children with cystic fibrosis (CF) and a hairdressers’ solidarity event. On 2 May Respiralia organised Breathe Zumba for CF in collaboration with gyms in Mallorca.

The European Federation of Allergy and Airways Diseases Patients’ Associations (EFA) took the patient perspective to the World Health Organization in April by meeting with officials from the ministries of health and the environment, who address air pollution. It is rare for patients to be involved with public authorities, and so it was important for EFA to have the opportunity to present basic principles on advising patients on air pollution, and to promote the involvement of patients in the improvement of air quality.

Round table for rare diseases

Rare Diseases Croatia organised a round table discussion to share views about the problems patients with rare diseases face in Croatia. There were also discussions on the provision of care for people with CF, as services, including physiotherapy, are not available in all areas.

ASMAMADRID and two local patient education organisations, KIDSEVENTOS and EDUCASMA came together for World Asthma Day in Spain, to raise awareness of the impact of the condition. They organised a training workshop on 11 May to help citizens know the symptoms of asthma and to improve asthma and allergy control.

UK workers remember those killed and injured at work

The Merseyside Asbestos Victims Support Group (UK) commemorated International Workers’ Memorial Day with 28 other organisations in Liverpool on 28 April. This year the annual event focused on exposure to hazardous substances in the workplace with special emphasis on asbestos.

286 runners, raising money for Asthma UK, completed the London Marathon. Their fundraising efforts were supported by activities, such as quizzes and baking sales, to reach the target of collecting £500,000 for Asthma UK.

The Pulmonary Fibrosis Foundation USA is hosting an international pulmonary fibrosis conference on 12-14 November. The conference will be attended by scientists from Europe and will include a session on European patient advocacy. Registration opened on 28 April.