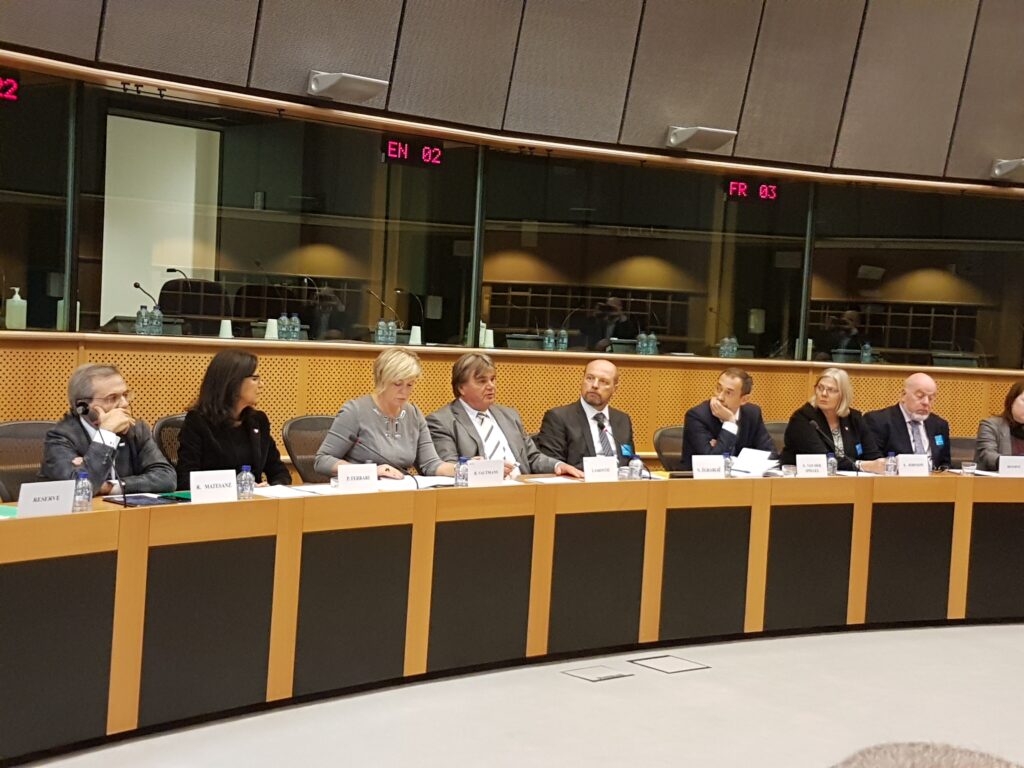 The last month has been very busy for patient organisations in Europe. Read below to see how they have been promoting and campaigning for lung health recently.

The last month has been very busy for patient organisations in Europe. Read below to see how they have been promoting and campaigning for lung health.

PHA Europe organised an event at the European Parliament to address the main barriers to and potential solutions for improving organ donation and transplantation on 18 October. The meeting was attended by MEPs, EU Commission representatives, healthcare professionals, public health NGOs and European patient federations for lung, liver, kidney and liver diseases.

Pisana Ferrari, CEO of PHA Europe, opened the session on behalf of the patients’ community and other organisations. Hilde De Keyser of Cystic Fibrosis Europe also presented at the event.

The European Idiopathic Pulmonary Fibrosis & Related Disorders Federation (EU-IPFF) is holding its 2nd General Assembly in Brussels on 16–19 November. The EU-IPFF is using the event to expand its representation to 10 EU countries.

During the event there will be a strategic parliamentary meeting, attended by selected MEPs, EU Commissioners and permanent health attaches aimed at promoting the Written Declaration on IPF, which was adopted in April.

Educational event for parents of children with cystic fibrosis

The Czech Cystic Fibrosis Association organised a weekend of educational activities for parents of children with the condition at the end of October.

Social workers and by physiotherapists ran sessions aimed at helping parents come to terms with their children’s diagnosis and prepare for the future.

The Association for Patients with Lung Disease (APLD) in Turkey organised an activity aiming at increasing public awareness of lung diseases for World COPD Day.

The activity was called ‘Give voice to your breath’ and the Istanbul Film Music Orchestra composed a piece especially for the event which was performed on the day.

Luca Roberti, president of the newly created Associazione Apnoici Italiani- ONLUS, and Mark de Quidt of ApneuVereniging Vlaanderen met on 21 October to discuss the creation of a sleep apnoea network, as a way to exchange information, share events and plan campaigns.

The purpose of the planned network is to address the under-diagnosis of sleep apnoea in Europe and discuss an EU directive for driving licenses, the road security, and the screening of drivers who are potentially at risk.

FFAAIR organised their first National Respiratory Day in Lyon. There were lung function testing events and information sessions on COPD, asthma, idiopathic pulmonary fibrosis, sleep apnoea and patient education. People with lung conditions were able to share their stories at a round table event.

Rose of the Sea Fiesta for cystic fibrosis

The Respiralia Foundation and the Cystic Fibrosis Balearic Association organised the annual Rose of the Sea Fiesta against Cystic Fibrosis on Saturday 29 October in Son Muntaner Golf.

The Rose of the Sea Award was presented to Professor Jean Chevaillier for his contribution to the treatment of the condition using autogenous drainage, an active breathing technique.

FENAER recognised as a caregiver

FENAER has recently taken part in an event in Madrid that recognises the contributions made by the countless carers in the country.

The event was held to highlight the selfless dedication of many people, those who care for others and FENAER received a Diploma of recognition as a principal caregiver.

Alpha-1 Ireland released a new educational film on the condition, which was officially launched at the Annual Alpha-1 Conference on 7 October.

The film was funded by an educational grant from the Irish Government through the Health Research Board and developed in conjunction with COPD Support Ireland, the Royal College of Surgeons in Ireland, and Dublin City University.

New video on effects of COPD

To commemorate World COPD Day, the British Lung Foundation recently asked patient representative Chris Warburton to appear in a video to explain the effects of COPD.

Read more and watch the video.

National campaign on Pulmonary Arterial Hypertension launched in the UK

The Pulmonary Hypertension Association UK (PHA UK) launched its PH Awareness Week 2016, which ran from 19 – 27 November to encourage conversations about what it feels like to live with the condition.

The Fungal Infection Trust gave a presentation at the University of Manchester in the UK in October.

One of the events was a balloon race, with each balloon representing a fungal spore. Some balloons have been found as far away as Germany.

The update to the Alpha-1 Global is now live. The main webpages are available in English (default), Spanish, French, German and Portuguese (select language on the top left).

You can view each of the 42 country pages by clicking on the respective flag at the bottom of the each page.