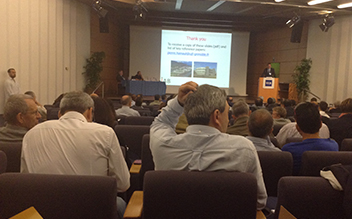 On 11–15 September, leaders in pulmonary hypertension (PH) from 27 countries attended the 11th General Annual Meeting of the European Pulmonary Hypertension Association (PHA Europe) near Barcelona, Spain. The meeting involved the key medical opinion leaders in the field as guest speakers, who talked about, among many other things, 20 years of progress in treatments for PH and the importance of rehabilitation for people with the condition.

As a new board member, Juan Fuertes was asked to fill the vacant position of secretary and votes on membership applications from the PH associations of Bosnia-Herzegovina, Denmark, Lithuania and Macedonia were taken. A full report will follow in the winter 2014 edition of the Mariposa Journal, due in December.

During Ireland’s first Lung Health Awareness Week, healthcare professionals carried out 400 spirometry tests in the four locations involved in the campaign. The testing events were complemented by the Science Gallery, which received a lot of interest, and it presented a great way for people to pass the time while waiting for their lung function tests.

The awareness week will be followed by a stand the “Over 50s” show, organised by the Asthma Society, on 17–19 October, and will include more lung function testing.

Ahead of new EU regulations on food information for consumers coming into force, the European Federation of Allergy and Airways Diseases Patients’ Associations (EFA) joined representatives from the EU, national food safety and health authorities, healthcare practitioners, the food industry and patients at the European Parliament on 24 September to discuss ways of improving allergens information on food labelling for consumers.

At the event, members of the EFA food allergy working group from the Netherlands, France and Italy shared their perspectives on the best ways allergens information should be presented to consumers.

A record number of more than 2,400 guests participated in the 7th lung symposium organised by the patient organisation COPD Deutschland, in Hattingen, Germany, on 13 September. The symposium ranks among the largest chronic obstructive pulmonary disease (COPD) and emphysema congresses in Europe. This year’s theme was “Chronic airways diseases – new findings and treatment possibilities”.

The annual symposium is much more than an information event, and lectures given by top lung specialists were accompanied by spirometry, blood pressure, small airways and oxygen saturation tests, as well as measurements of contamination of different types of masks used for mechanical ventilation. COPD Deutschland is already busy planning next year’s symposium.

Members of Respiralia raised awareness of cystic fibrosis in children and young people with the “Solidarity Cystic Fibrosis Walk” on 20 September. In collaboration with local businesses in Citadel, Menorca, they raised over 1,400 euros.

This was followed by another “Solidarity Walk” for cystic fibrosis in Majorca on 28 September, where 450 participants got wet in the rain when walking their miles to show their support.

Earlier in September, Vaincre raised their profile in Belgium by presenting a new certificate course in thoracic oncology to doctors in Brussels. It was a great opportunity for the lung cancer patient organisation to raise awareness of their work to a large number of delegates from the medical profession.

The high profile event was organised in collaboration with the European Lung Cancer Working Party (ELCWP) and the French speaking lung society (SPLF), and was followed by a party.

Ball and auction for obliterative bronchiolitis

September’s straw challenge event, planned by the Breathtakers obliterative bronchiolitis (OB) Trust, unfortunately had to be postponed to the end of October due to illness. Instead, the trust managed to raise a staggering £3,220 during their ball and auction event in Newcastle, UK at the beginning of the month.

A special mention must also go to Ewan Patton, who completed the Junior Great North Run. Find out more about his achievement.