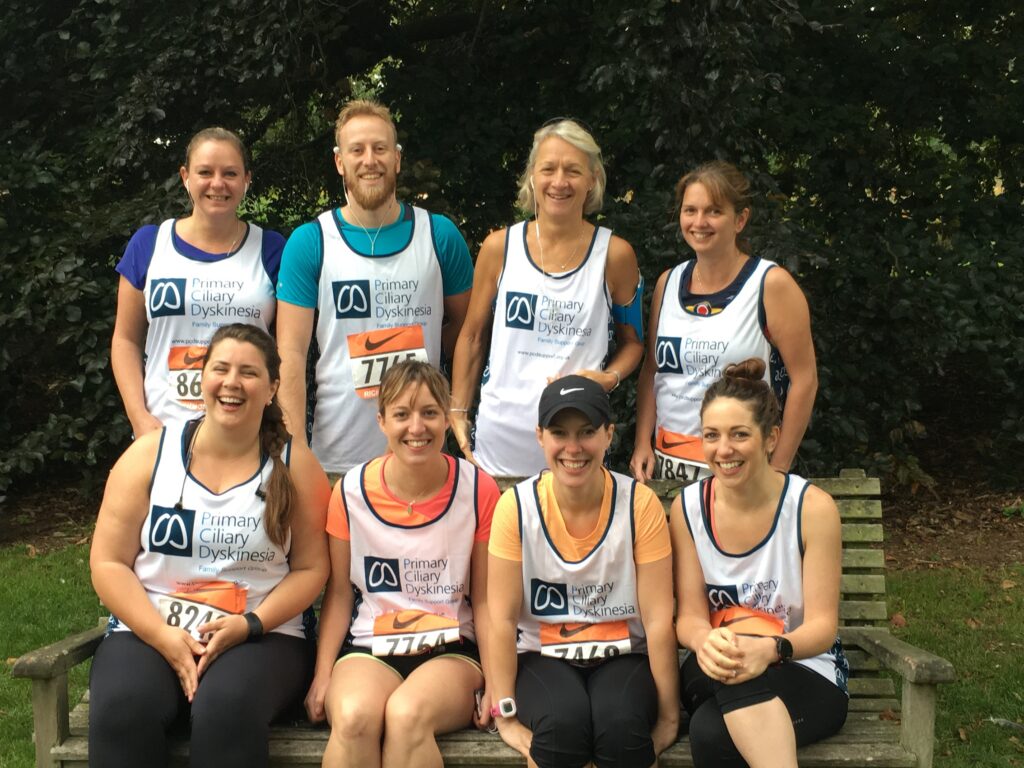 Picture: Professor Claire Hogg, supporter of the UK Primary Ciliary Dyskinesia Family Support Group with some of the PCD team from the Royal Brompton and Southampton hospitals who ran the Richmond Half Marathon.

Putting early diagnosis of rare diseases on top of the European agenda: one year after the written declaration on idiopathic pulmonary fibrosis

The meeting of key stakeholders from the IPF and wider rare disease communities provided a platform to call for action on early diagnosis of rare diseases. Elena Gentile MEP suggested developing and promoting an oral question for written answer on improving early diagnosis for rare diseases. EU-IPFF and its partners look forward to continuing their collaboration with EU policymakers and ensuring that the IPF patient voice is heard at the European level.

EU-IPFF is also proud to launch the first ever European Consultation Guide on IPF, which has been compiled by EU-IPFF member organisations and scientific experts. The guide aims to improve care and strengthen the patient-healthcare professional relationship by providing comprehensive information on IPF, treatment options and care. The guide is available on the EU-IPFF website, as well as as a downloadable PDF in English, Dutch, French, German, Italian and Spanish.

For IPF World Week, Action for Pulmonary Fibrosis wanted to bring the entire IPF community together to make a difference to those affected by the condition. Their supporters held events all over the UK and shared their stories on social media.

Action for Pulmonary Fibrosis also launched the Mike Bray IPF Research Fellowship in memory of its founder and former chairman. The £300,000 fellowship will be awarded over 3 years to an outstanding research project which enhances understanding of the causes of IPF, or advances treatments for it.

The Irish Lung Fibrosis Association (ILFA) celebrated its 15-year anniversary with the launch of a special edition magazine, ILFA 15, during IPF World Week on 22 September. The 88-page magazine, which includes an article written by former ELF Chair Dan Smyth, features articles written by patients, family members, healthcare professionals and fundraisers and describes the advances and milestones in IPF and patient care since ILFA started in 2002.

The Czech Civil Association Against Lung Diseases, which brings together people with chronic lung diseases and healthcare professionals, has reviewed their activities over the last year. Successes included a series of lectures aimed at people with lung conditions, public spirometry testing at the Prague Half Marathon, and the set-up of specialised local clubs for people to share their experiences of living with a lung condition. There are more events and activities planned for the coming year, including working with the Czech Ministry of Health to raise awareness of lung health.

During the summer holidays, Italian organisations Respiriamo Misurina and ARI-AAA3 collaborated with the Croatian Respiratory Care Center Lječilište Veli Lošinj to host summer camps for children with asthma and allergies. The camps allowed children to spend time away from pollution and meet other children living with lung conditions and their families. With the support of healthcare professionals, children had health checkups and took part in physiotherapy and sporting activities.

The Alpha One Foundation Ireland is holding its annual patient conference on Friday 20 October in Dublin. An opportunity to meet other patients and hear the latest policy and research news, the conference will feature Henry Moehring, President and CEO of the US Alpha-1 Foundation, as the special guest speaker.

A new organisation, Associação de Transplantados Pulmonares de Portugal has been set up to improve support and information for patients and their families. By providing support, sharing experiences and information between patients, advocating for good care, and providing scientifically-accurate knowledge about transplantation, the association aims to improve the quality of life of people going through lung transplantation and has lots of plans for the coming year.

Event for people with pulmonary hypertension in Spain

The Fundación Contra la Hipertensión Pulmonar (Foundation Against Pulmonary Hypertension, Spain) organised an event in September for children and families. With a range of activities, including the opportunity to talk to specialists, sessions focused on how to support parents and carers, social activities for children, and support groups led by psychologists, the event was well received by everyone.

Solidarity run for people with cystic fibrosis in Palma, Spain

On 11 November 2017, LAM Academy-Sweden will hold their annual members’ meeting at Karolinska University Hospital. The meeting will include presentations about lymphangioleiomyomatosis (LAM) from healthcare professionals and patient groups focusing on the latest science, news and living with LAM.

The PCD Family Support Group extends their congratulations to Dr Claire Hogg, a clinician and researcher with whom they have worked closely with for many years and who has recently been awarded a Professorship by Imperial College London. Professor Hogg has been a leading force in driving forward PCD diagnosis, paediatric management services, and research in the UK.

In her spare time Professor Hogg is a keen runner and was part of a team that ran the Richmond Half Marathon recently, raising over £1,600 for the PCD Family Support Group.

Claire Hogg is pictured above on the back row, second on the right with some of the PCD team from the Royal Brompton and Southampton hospitals.

In June 2017 SarcoidoisisUK asked for supporters’ comments and suggestions on their work. They had many thoughtful responses and there was a shared feeling that some key areas could be improved upon. SarcoidosisUK have already put in place some of the ideas, such as a consultants directory, clinical trials page and more information about the charity’s spending.

SarcoidosisUK runs a growing number of support groups across the UK and has just launched a new support group in Nottingham. The first meeting took place on Tuesday 3 October, and the second will be on Tuesday 14 November.

Pulmonary Hypertension Ukraine Rare Disease Association (PHUDRA) took part in the annual Pulmonary Hypertension Europe Conference on 18–21 September in Barcelona, Spain. The conference brought together patients, carers, doctors, and pharmaceutical industry representatives from 38 European countries. PHUDRA exchanged their experiences and achievements, including their successful fundraising campaigns. Participants also discussed the importance of cross-border cooperation and working together at a European level to help people with pulmonary hypertension. Butterflies were fluttering in Barcelona, as well as in Lviv, Ukraine at the ‘Butterfly in Blue’ fashion show on World Pulmonary Hypertension Day.