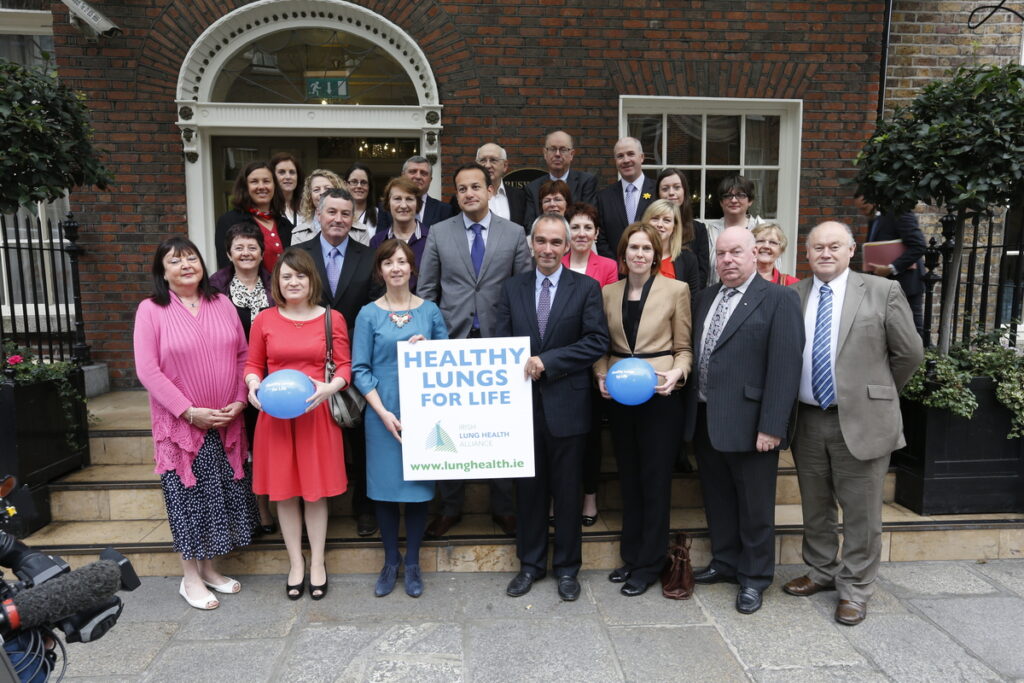 On 16 September 2014 Leo Varadkar, the Irish Minister of Health, launched Ireland’s first ever National Lung Health Awareness Week in Dublin. Research, conducted on behalf of the Irish Lung Health Alliance (ILHA), found that 49% of the Irish population had experience of lung disease, either personally or through a member of their family, yet awareness of symptoms remains low. The launch was attended by representatives of various European organisations and saw a number of well known Irish sporting figures supporting the event. It was rounded up by Dan Smyth, ELF Chair.

EURORDIS, the voice of people with rare diseases in Europe is inviting nominations for the fourth EURORDIS Awards, which recognise the outstanding contributions of advocacy groups, volunteers, companies, and policy makers towards reducing the impact of rare diseases on people’s lives. The organisation encourages people to nominate the individual, patient organisation or company they feel merits one of these prestigious awards in a number of categories including a patient organisation award.

Guenther Wanke, who has pulmonary fibrosis (IPF) and is part of the Austrian self-help group, LOT Austria, appeared in a TV feature on a local Austrian network. He talked about the importance of early diagnosis for lung fibrosis and promoted the upcoming IPF week and LOT’s IPF event on 29 September in Krems, Lower Austria.

The Association Asthme et Allergies invited the public to a live online chat on 16 September to coincide with the beginning of the new school year. Experts in the field of respiratory medicine, allergy, paediatrics, psychology and more, were on hand to answer any questions from the public about all issues relating to asthma on line.

The Alpha-1 Global website was launched on 26 August 2014, giving people with Alpha-1 a central network for exchanging news, information and ideas on improving Alpha-1 awareness, detection and access to care around the world. Following the 4th International Alpha-1 Patient Congress in Barcelona, Spain in April 2013, where Alpha-1 leaders from 23 countries had gathered to discuss global Alpha-1 issues, the website went live this summer after more than a year of planning.

Families of people with obliterative bronchiolitis take the “straw challenge”

Breathtakers, the UK’s only registered charity for obliterative bronchiolitis (OB) is encouraging families of OB sufferers to take the “straw challenge” as part of the international Healthy Lungs for Life campaign. The challenge involves breathing through a straw for 60 seconds to replicate the feeling of OB. In August, the charity was also proud to present a cough assist machine to the children’s respiratory unit at Southampton Hospital.

The Alpha-1 UK support group held its 13th Annual Social Gathering and Information Day in Lincoln on 22 September. The event was one of the largest gatherings of people with Alpha-1 and their families in the UK. It was an opportunity to meet and socialise with fellow Alphas. The event featured guest speakers including experts in the field of Alpha-1 Antitrypsin Deficiency, a tombola and general fun and chat.

Back to school asthma campaign in Ireland

In August the Asthma Society of Ireland launched a campaign to raise awareness of the dramatic increase in asthma admissions at the start of the new school term. They offered training and support to parents and teachers as they headed back to school.

Frances Guiney, Asthma nurse specialist with the Asthma Society of Ireland, said: “The month of September is clearly a dangerous time for children with asthma with significant spikes in hospital admissions. Furthermore our own research shows that children miss 10 days of school each year due to asthma.”

The Asthma Society of Ireland currently has a roadshow of nurse led clinics about to kick off in schools and shopping centres around the country.