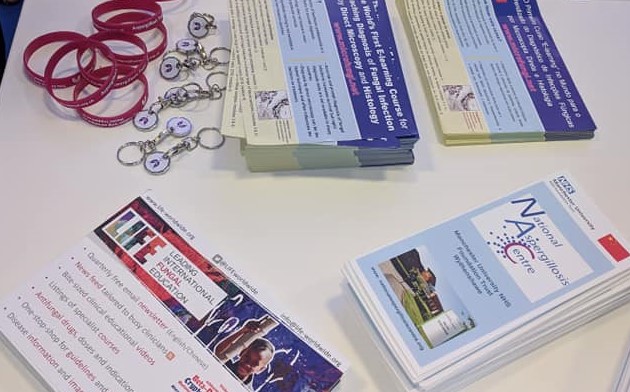 Patient organisations have been busy supporting and advocating for people living with lung conditions throughout Europe. Read below for a summary of a selection of these activities.

Picture: Aspergillosis Trust information being handed out at the ERS International Congress in Paris

Pulmonary fibrosis meetings in nine hospitals in the Netherlands

This month Longfibrose (the Dutch Pulmonary Fibrosis Society) gathered together approximately 500 people with pulmonary fibrosis across nine hospitals in the Netherlands to encourage them to share their experiences with each other. The key message of these meetings was ‘you are not alone’, helping patients feel part of a solid community.

They have also produced a video (in Dutch), which aims to help patients and their loved ones talk openly about their thoughts and feelings and ask others for advice and support.

Raising awareness of aspergillosis at the ERS International Congress

In preparation for the European Respiratory Society (ERS) International Congress 2018, patient members of Aspergillosis Trust worked hard to redevelop their website. The organisation was represented at the ERS Congress in Paris on 15-19 September by the Manchester Fungal Infections Group. Information packs and freebies such as wristbands, keyrings, notepads and cotton shoppers spread quickly across delegates, raising important awareness of the illness.

Get more information on the campaign.

The first ever sporting event in Finland dedicated to those who suffer from rare lung conditions was held on 1 September. The Rare Marathon was organised by the Association for Respiratory Health in Finland with the Organisation for People with Heart and Lung Transplantation.

Over 80 people – including people with rare lung diseases, people who have had a lung transplant, loved ones and other people interested in the matter – took part. Former top athlete Tuija Helander, who has since had a lung tranplant due to a rare lung condition, also participated. Each person walked or ran 420 m or 4.2 km, with a traditional marathon length being 42.2 km.

The event aimed to highlight the importance of physical activity for lung health, encouraging people to exercise to improve their physical and mental wellbeing as well as raising awareness of rare lung conditions. Despite the rain, the event was a success, and participants all had a positive attitude.

The Rare Marathon was also a charity event, both raising funds for oxygen saturation metres in healthcare centres and university hospitals and to support a trip to the 2019 world championship of athletes with lung and heart transplants.

The Italian rare conditions organisation AMA fuori dal buiohas has run monthly support groups for people with idiopathic pulmonary fibrosis (IPF) and their families since 2013. These sessions aim to allow people affected by the illness to meet and talk to others living with the same condition and create a support network.

The effects of the support group were recently evaluated in a study, which was published in the Italian scientific publication, Acta Bio Medica. Researchers concluded that after six months of attending sessions, participants saw notable benefits on anxiety, depression, positivity, sense of control, general health and vitality.

Read the abstract of the article.