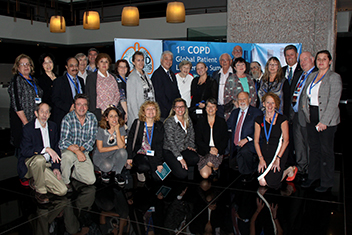 Vanessa Smith, one of our patient ambassadors, recently attended the 1st COPD Global Patient Leadership Summit. Here are some of her thoughts and experiences of the event.

The 1st COPD Global Patient Leadership Summit, held in Madrid, Spain this month, brought together patients and their representatives from as far afield as Argentina, India, Australia and the UK. Together with physicians, industry partners and health experts, they debated the key issues affecting the worldwide chronic obstructive pulmonary disease (COPD) community. All shared a common goal:  to make life better for people who live with COPD in every country of the world.

Patient advocates attending the summit had each completed and submitted a comprehensive pre-summit survey. The results gave a clear picture of the current status of COPD and the challenges faced in their respective countries. Time and again the same core issues were identified, and, whether in Granada or Grimsby, Detroit or Delhi, it was apparent that the time has come for patients to unite, think, and act on a global scale.

Much work was packed into one long day – and a few COPD myths were exploded. One such myth is that COPD is a disease of the elderly – yet, as Monica Fletcher OBE and past chair of the ELF explained, more than half of those diagnosed are in the 40-65 age group.

The stigma surrounding COPD was seen as a major contributing factor to the low priority, low levels of funding and little research it receives. In fact, the term ‘stigma’ was replaced by ‘discrimination’ when Dr Inmaculada Alfageme, of the Spanish Society of Pneumology and Thoracic Surgery (SEPAR) spoke passionately and firmly stated, “this is a matter of discrimination – not just stigma – and we have to get past that”. This was an issue that every one of us agreed upon.

Other shared experiences included the lack of public awareness, late diagnosis, and the constant references to smoking, reinforcing the widely held perception of COPD as a self-inflicted and deserved condition.

The lack of media attention was discussed. It was noted that barely a day passes without mention of cancer, diabetes, heart disease, etc. yet when journalists or editors asked why they do not produce more COPD articles the responses were that it’s not “sexy” or “interesting” and even that “it doesn’t affect women”.

The representative from India told us how domestic use of biomass fuel was a major cause of COPD, particularly for the women of his country. With so many living in rural areas, there is often little or no access to medical help. “We have to start from scratch,” he said, and no one present was in any doubt as to the size of the task that lay ahead of him.

Despite the challenges, the overall mood was one of determined optimism and camaraderie. COPD is at a tipping point. Governments are starting to realise the cost of ignoring it, and we must capitalise on this – not just as organisations but as individual patients too.

We must galvanise patients from across the world to use social as well as traditional media. We must exert constant pressure on politicians at the local, national and international levels. As John Walsh said, “We may be breathless but we are not without a voice”. We intend to use it.