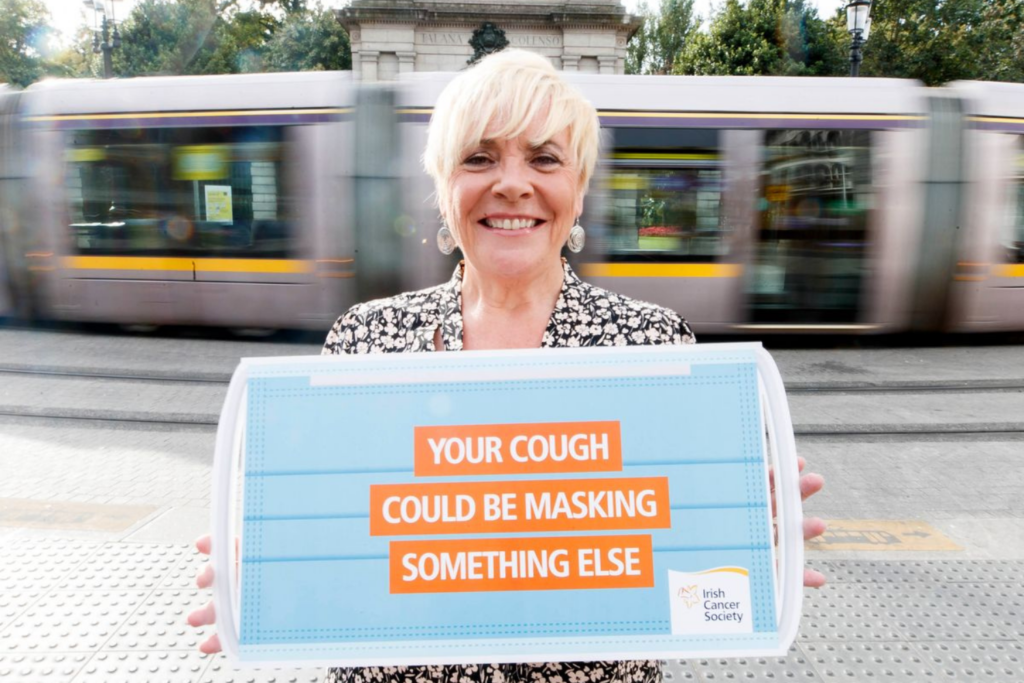 Patient organisations across Europe were heavily involved with World Lung Day on 25 September to raise awareness of lung health. Many launched new campaigns and held webinars to provide useful information for people affected by lung conditions.

Irish Cancer Society launches campaign: Your Cough Could Be Masking Something Else

The Irish Cancer Society launched a Lung Cancer Awareness Campaign on Monday 14 September: Your Cough Could Be Masking Something Else

Lung cancer referrals to specialist clinics have fallen by 27% in Ireland between March and August 2020 due to COVID-19. Potentially 244 patients with suspected lung cancer symptoms had not informed their doctor and, therefore, were not referred to specialist clinics in that period. While the pandemic has raised awareness of coughing as a symptom of COVID-19, the aim of this campaign is to remind people that a persistent cough is also an indication of lung cancer, and to communicate the importance of early detection.

You can do a free lung cancer checker at www.cancer.ie/lung/checker and get more information.

The Padua Lung Transplant Union organised their second annual Notte di Respiri (Night of Breath), followed by a medical conference the next day. The Night was a musical show that focused on breathing, raising awareness of lung health and giving a voice to people affected by lung disease. Both events followed strict COVID-19 safety regulations. They were also available to access online to reach as many people as possible. The events were a success despite the challenges due to COVID-19.

Find out more about the event on their Facebook page.

During the months of September and October Alpha-1 Spain is offering communication workshops and training of spokespersons for patients and relatives of those affected by Alpha-1 Antitrypsin Deficiency. Professionals such as Luis Fraga, Sara Dobarro and Elena Goyanes are carrying out the activity online.

Action for Pulmonary Fibrosis (APF), launched its campaign Shout Out for PF Month during September 2020. Families affected by pulmonary fibrosis wrote to their local MPs (Members of Parliament) asking for fairer access to anti-fibrotic treatments for patients with pulmonary fibrosis in the UK. Over 200 letters were received by MPs across the UK. APF thanks Janice Long, DJ and presenter, for raising awareness of the disease in the national press and local radio, for telling people to ‘#ListenToTheirLungs’.

The Respiralia Foundation has launched a Virtual Escape Room. It is a fun tool to learn about cystic fibrosis (CF) through Margo, a girl with CF who participates in the Foundation’s annual event Swimming Tour around Formentera against Cystic Fibrosis,which they were not able to carry out this year. Take part in the Escape Room: www.respiralia.org/en/respiralia-escape-room/

The Asthma UK and British Lung Foundation Partnership has announced Sarah Woolnough as the new Chief Executive to start in December 2020. The current chief executive, Kay Boycott, stated “It’s been an absolute privilege to have served people with lung disease. I’m extremely proud of what we’ve managed to achieve together, including proving the value of the merger between Asthma UK and the British Lung Foundation.”

Dzubinska Myroslava has pulmonary hypertension (PH) and tested positive for COVID-19. She shared her story of having COVID-19 as someone with PH and about her recovery. Read Dzubinska’s story.

Ruslana Kryvushenko shared her story about what it was like being on the waiting list to get an organ transplant in Ukraine. Read Ruslana’s story.

In collaboration with the pneumological doctors from Azienda Ospedaliera Universita’ Careggi, in Florence, and the hospital Misericordia in Grossetto, Respiriamo Insieme organised an event called RespirAmi – Digital (LoveToBreathe) on World Lung Day. The event was six hours’ worth of webinars spread over two days, and it allowed patients to be divided into specific breakout rooms.

In honour of World Lung Day, Respiriamo Insieme has launched a petition to raise awareness of severe asthma and is asking for your support. Severe asthma is a different condition than asthma; it is often diagnosed late, drastically affecting the patient’s quality of life. Knowing the difference is the first step towards the right cures and leading a better life.

A conference to launch the “Asthma White Paper” in line with World Lung Day took place in Paris. Along with scientific and medical associations, the French Federation of Associations of Patients with Respiratory Insufficiency or Handicap (FFAAIR) participated in all stages of the creation of this document, which contains 33 concrete proposals to improve the quality of care of asthma patients.

Aspergillosis Trust (AT) became a partner in this year’s World Lung Day to raise awareness of aspergillosis.

Pulmonary Hypertension and Scleroderma Patient Association (PAHSSc) continues to be very active online; they have set up a committee for editing and expanding knowledge on their website, and they held an awareness session for idiopathic pulmonary fibrosis on World Lung Day.

They have also been raising money and promoting physical activity by donating the ‘steps’ taken each day to the association through the phone app ‘Help Steps’.

As a founding member of the Rare Diseases Network, PAHSSc has continued with the survey on COVID-19 and rare diseases, which started in March; they shared the results with the health authorities, and joined the rare diseases meeting with the Ministry of Health where they discussed the difficulties that patients are facing during the pandemic and their solutions.