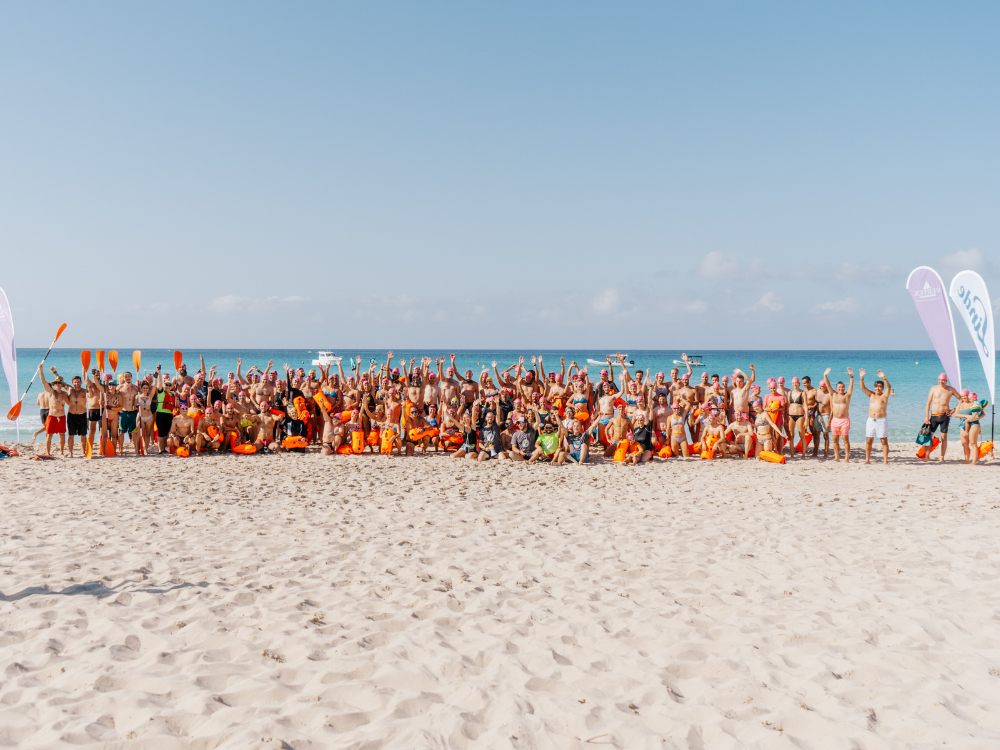 The last few months have been action-packed for patient organisations across Europe and beyond. There have been lots of inspiring activities to raise awareness of lung health in line with campaigns, as well as new publications to provide reliable information about lung conditions to patients.

An annual swimming tour around Formentera was held again by Respiralia Foundation and the Balearic Association of Cystic Fibrosis. The event helps raise awareness and funds for cystic fibrosis.

In September, female leaders from patient and healthcare professional networks in Ibero-American countries came together with a common goal: to raise their voices for the right to breathe clean air, and to take care of the planet and health, for current and future generations.

Lovexair Foundation and key organisations and individuals across Spanish and Portuguese-speaking countries embarked on the #TomateUnRespiro (#TakeABreath) campaign to promote the importance of lung health for World Lung Day (25 September).

The Pulmonary Fibrosis Trust in the UK has been voted ‘Charity of the Year 2021/2022’ by the Prestige awards. The accolade is in recognition of the wonderful work carried out by the PF Trust in supporting those affected by pulmonary fibrosis.

A specialist pulmonary fibrosis hospital in the Netherlands held an online meeting in collaboration with their local patient association, the Dutch Association of Pulmonary Fibrosis Patients, on 10 September. The meeting brought together patients and their families with doctors, nurses and other care providers, to inform them about a range of topics surrounding pulmonary fibrosis. You can watch a webinar of this meeting here (in Dutch).

The Longfibrose Patientendag has also offered their members a chance to request a special pin badge from the BreatheLife campaign by the European Idiopathic Pulmonary Fibrosis & Related Disorders Federation (EU-IPFF). They also included a postcard and bookmark of the EU-IPFF campaign with their September Information Sheet. The postcard included a personal message for members: Keep courage, keep moving and enjoy the little things in life!

The Spanish COPD Patient Association (APEPOC) has been actively working on the topics of climate change and air quality. They have joined forces with the ECODES foundation (Foundation Ecology and Development) to develop a questionnaire for healthcare professionals and respiratory patients to explore these important concepts.

The Alfa-1 Spain Association has published ‘Soy Alfi’, a comic book for children with Alpha-1 Antitrypsin Deficiency. The book, whose script has been prepared by the association itself, has drawings by the illustrator Sr. Reny and shows in a visual and accessible way the circumstances that patients face from early childhood.

Alpha-1 Plus in Belgium took part in the inauguration of a new Takeda (a Japanese pharmaceutical company) factory in Belgium on 31 August. The factory will produce a plasma-derived product, which is the product that Alpha-1 patients need to reduce the progression of pulmonary emphysema. The product is not yet available in Europe and the augmentation therapy that uses the product is not reimbursed in Belgium or in many other European countries, so the product will be exported to the USA. Representatives from Alpha-1 Plus took the opportunity to create awareness at the event which was attended by the Belgian authorities, including the Prime Minister.

Alpha-1 Plus commented: “We are happy and congratulate Takeda and Belgium on the new factory and we hope this could help us to engage in a dialogue with other stakeholders and the Belgian authorities to continue creating awareness and finally get the much needed therapy reimbursed for all patients.”

Watch a video interview that featured on regional TV (in French).

11 members of Alpha-1 Plus have formed a team for ELF’s #TaketheActiveOption in September challenge to raise money for and awareness of the Healthy Lungs for Life campaign. They have been busy fundraising and posting on social media about their activities throughout the month. You can find them with the hashtag #TakeTheActiveOption and on their fundraising page, where you can sponsor them: https://www.justgiving.com/fundraising/belgianalpha1angels

New magazine launched for PAH and scleroderma patients in Turkey

Nefes (Breath), a new on-line magazine, has been launched by the Pulmonary Hypertension and Scleroderma Patient Association (PAHSSc) in Turkey. It targets patients, caregivers and doctors. Nefes is full of interviews with PAH and scleroderma patients, doctors that specialise in these diseases, the spokesperson for the Rare Diseases Network and includes valuable international input from Hans Dieter Kulla (German PHeV) and Tess Guzman. Read the first issue here: https://www.pahssc.org.tr/e-dergi

The Association were also busy with other activities this month:

Variety of events for Associazione Italiana Bronchiettasie in September

A range of events and various initiatives were held during September by the Italian Bronchiectasis Association (AIB):

Awareness-raising activities from the Aspergillosis Trust

The Aspergillosis Trust UK has recently signed up to the ERS statement on World Health Organization Air Quality Guidelines 2021, including adding their logo to the statement.

They also took part in the promotion of Fungal Disease Awareness Week, which urged healthcare providers and patients to “Think Fungus” when symptoms of infection do not get better with treatment.

In addition, a new JustGiving donation page has been set up to allow the charity to receive donations.

World PH Day more colorful and global than ever before

The European Pulmonary Hypertension Association (PHA Europe) co-organised an MEP Lung Health Group event on research and re-launched the worldphday.org webpage. With the involvement of local patient associations, PHA Europe organised numerous webinars in English, Spanish and Portuguese, launched an online petition, and provided ready-to-use resources for raising awareness on social media platforms. You can learn more about their global, EU and local level activities in their journal, Mariposa.

The Respiratory Right Care summit will initially convene members from the Global Allergy & Airways Patient Platform (GAAPP), GINA/GOLD, WAO, WHO-GARD, FIRS, IPCRG and community stakeholders to draft and endorse initial policy statements. These statements will then be assembled into an advocacy toolkit to share with all participating organisations, patient organisations and international partners to drive policy change globally. The 4 pillars of the RRC key actions for policy changing will be access to care and innovative treatments in respiratory care, continuous funding for research and development, health equity and environmental health.

Webinar series for NTM patients and their families

NTM Info & Research has three ongoing webinar series to provide education to patients and their families. The topics are nutrition, emotional wellbeing, and ‘science from your sofa’, which focuses on science and research. For the full calendar of upcoming webinars, visit: https://connect.ntminfo.org/events/calendar

You can catch up on previous webinars on the NTMir YouTube channel.

The Foundation for Sarcoidosis Research (FSR) in the USA held their first ever ILD Day on 15 September 2021 to educate patients in the USA about interstitial lung disease (ILD) through media coverage, social media content and an educational webinar.

Additionally, a new article on the challenges and management of sarcoidosis has been published in the New England Journal of Medicine. The article, which included two of FSR’s Scientific Board Advisory (SAB) members as its authors, was covered in a press release.

Read the FSR’s Mid-Year Report for more information on the organisation.