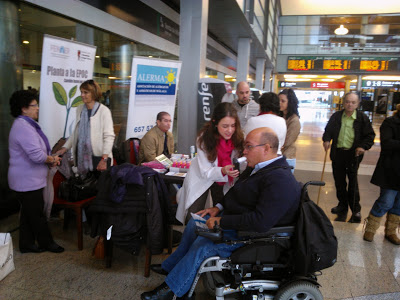 Patient organisations across Europe have been organising and participating in many activities to raise awaresness of respiratory health.

Patient organisations across Europe have been organising and participating in many activities to raise awaresness of respiratory health:

Last month, the European Federation of Allergy and Airways Diseases Patients’ Associations (EFA) launched its Manifesto for the next European Parliament elections to be held in May 2014.

More than 450 people from across Europe put a signature to the document which calls on the Members of European Parliament to commit themselves to three priority areas which are sub-divided into fourteen actions to improve health and quality of life of people with asthma, allergy and chronic obstructive pulmonary disease in Europe.

Sign the Manifesto and read about the areas for actions

The Irish Lung Fibrosis Association (ILFA) has launched the 2000 Steps a Day Exercise Challenge for lung fibrosis patients in June 2013.

Patients need to maintain their fitness in order to maximise their wellbeing but they struggle with breathlessness. The 2000 Steps a Day project was developed by Irene Byrne (Physiotherapist at the Mater Misericoridae University Hospital, Dublin) with ILFA. The 2000 Steps a Day challenge encourages patients to record the number of steps they take and to gradually increase their total daily step count by a further 2000 steps. Patients are given a pedometer (step counter), a leaflet explaining the benefits of walking as exercise and a diary to record their progress.

The British Lung Foundation (BLF) and Asthma UK are working together to support the All Party Parliamentary Group (APPG) on Respiratory Health in the UK. As its first activity, the APPG is conducting an inquiry into why so many people are still dying from respiratory disease in the UK. The APPG is now accepting written evidence from UK as well as international researchers, scientists and healthcare professionals who have specialist knowledge of respiratory conditions. The deadline for sending in written evidence is 10 January 2014. Find out more.

The Alpha-1 Alliance are organising a Patient Day in Parliament in Spring 2014 to provide a platform for patients to engage with their MP and raise awareness in Parliament of Alpha-1.

The Alpha-1 Alliance represents Alpha-1 patient groups and leading clinicians in the UK and was formed to campaign for better Alpha-1 services and therapies.  The Alliance has also recently carried out a survey of the Alpha-1 patient community to further identify unmet medical needs.  The outcome of this survey will inform a policy report and recommendations on Alpha-1 that will be launched at an event in Parliament on 10th December 2013.

John Mugford, Chairman of the Alhpa-1 UK Support Group, who are a member of the Alliance, said: “The commitment and hard work demonstrated by Alpha-1 Alliance in raising the profile of the unmet medical needs of Alpha-1 patients in the UK, the likes of which we have not seen before, has opened the door of opportunity for the Alpha-1 community to gain access to the specialised services and treatment we so badly need.”

To find out how you can support the campaign please visit the website.

Find out more about FENAER’s activities.

A new survey by the European Federation of Allergy and Airways Diseases Patients’ Associations (EFA) that care and prevention for COPD is inconsistent across Europe. The results of the survey, which was conducted in 16 countries, are published in a new book: ‘EFA Book on Minimum Standards of Care for COPD Patients in Europe’. The publication summarises the survey results provides 8 key interrelated areas which together provide a basis for patient-centered and minimum standards of care. An electronic copy of the EFA book Minimum Standards for COPD Care in Europe is available for download on EFA’s website here and the order of printed copies are available from the EFA office:info@efanet.org.