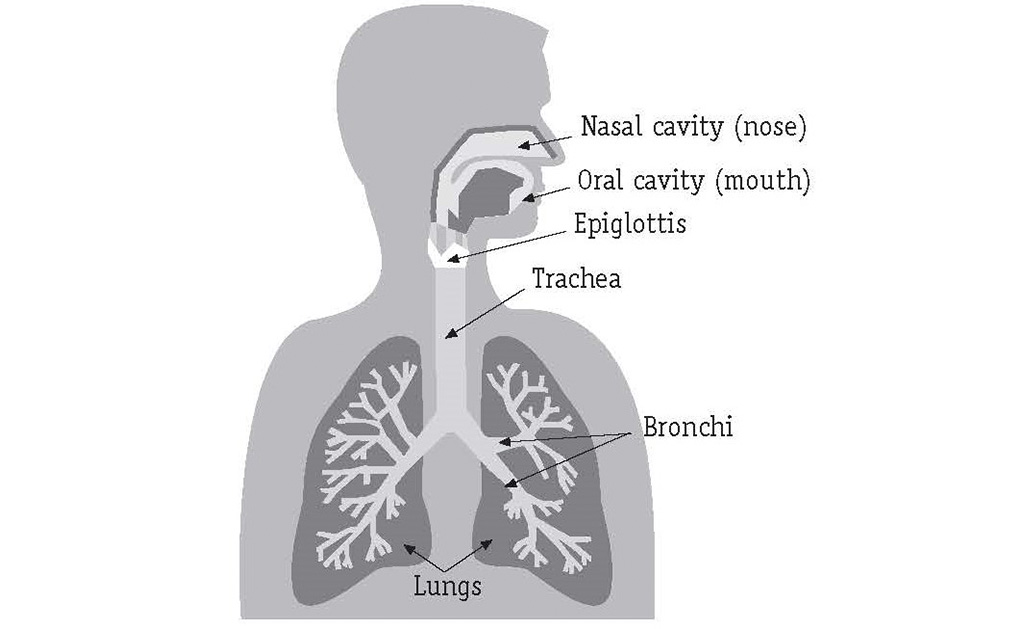 To help understand different lung conditions and to maintain healthy lungs, we should be familiar with how the lungs look and work.

How do the lungs normally work?

The chest contains two lungs, one lung on the right side of the chest, the other on the left side of the chest. Each lung is made up of sections called lobes. The lungs are soft and protected by the ribcage. The purpose of the lungs is to bring oxygen into the body and to remove carbon dioxide. Oxygen is a gas that provides us with energy, while carbon dioxide is a waste product or “exhaust” of the body.

How does air get into the body?

To deliver oxygen to the body, air is breathed in through the nose, mouth or both. The nose is the preferred route, since it is a better filter than the mouth. The nose decreases the amount of irritants delivered to the lungs, whilst also heating and adding moisture (humidity) into the air we breathe. When large amounts of air are needed, the nose is not the most efficient way of getting air into the lungs and therefore mouth breathing may be used. Mouth breathing is commonly needed when exercising.

Alveoli are tiny balloon-shaped cavities that gather together to form small clusters that look like grapes, attached to tiny breathing tubes. This allows a large surface area of about 50 to 100 square meters to be packed into the limited volume of the chest cavity. This large surface area makes the exchange of oxygen between air and blood much easier.

There are over 300 million alveoli in normal lungs. If the alveoli were opened and laid out flat, they would cover the area of a doubles tennis court. Not all alveoli are in use at one time, so that each lung has many to spare in the event of damage from disease, infection or surgery.

What about oxygen and carbon dioxide?

Surrounding each alveolus are tiny blood vessels or capillaries. The tiny blood vessels surround the alveoli like a net. This is where the oxygen that has travelled down the breathing tubes into the alveoli enters the blood. The carbon dioxide or “exhaust” gas from the body trades places with the oxygen by leaving the blood and entering the alveoli. Carbon dioxide is then exhaled out of the lungs. For our body to function well, oxygen must enter the blood and carbon dioxide must leave the blood at a regular rate. The lungs also contain blood vessels and a covering of nerve fibres. Outside of the lungs, there are two layers of thin material called pleura. One pleura is attached directly to the outside of the lungs and the other is attached to the inside of the chest, close to the ribs.

The lungs also have blood vessels that bring poorly-oxygenated blood in contact with alveoli in order to pick up oxygen and expel carbon dioxide. Blood that has picked up oxygen from the lungs returns to the left side of the heart and is pumped out to deliver this oxygen-rich blood (called arterial blood) to the body. After the blood has delivered oxygen to the cells of the body (tissues, organs, etc.) it is called venous blood, which returns to the right side of the heart. Venous blood contains high amounts of carbon dioxide and small amounts of oxygen. The venous blood is pumped into the lungs by the right side of the heart to get rid of carbon dioxide and to pick up oxygen.

Which muscles help in the breathing process?

Many different muscles are used in breathing. The largest and most efficient muscle is the diaphragm. The diaphragm is a muscle that lies under the lungs and separates them from the organs in the abdomen, such as the stomach, intestines, liver, etc. As the diaphragm moves down or flattens, the ribs flare outward, the lungs expand and air is drawn in. This process is called inhalation or inspiration. As the diaphragm relaxes, air leaves the lungs and they spring back to their original position. This is called exhalation or expiration. The lungs, like balloons, require muscle force to blow up but no muscle activity is needed to get the air out at rest.

How do the lungs protect themselves?

The lungs have several ways of protecting themselves from irritants. First, the nose acts as a filter when breathing in, preventing large particles of pollutants from entering the lungs. If an irritant does enter the lungs, it will get stuck in a thin layer of mucus (also called sputum or phlegm) that lines the inside of the breathing tubes. An average of 70 grams of mucus is secreted onto the lining of these breathing tubes every day. This mucus is “swept up” toward the mouth by little hairs called cilia that line the breathing tubes. Cilia move mucus from the lungs upward toward the throat to the epiglottis. The epiglottis is the gate that opens allowing the mucus to be swallowed. This occurs without us even thinking about it. Spitting up sputum is not “normal” and does not occur unless the individual has chronic bronchitis or there is an infection, such as a chest cold, pneumonia or an exacerbation of chronic obstructive pulmonary disease (COPD). Small particles that are deposited in alveoli are not removed in the same way because alveoli have no cilia. These particles are ingested by large wandering immune cells on the alveolar surface called macrophages. Other blood cells such as leukocytes also participate in defending the lung against microbes and foreign material.

Another protective mechanism for the lungs is the cough. A cough, while a common event, is also not a normal event and is the result of irritation to the bronchial tubes. A cough can expel mucus from the lungs faster than cilia.

Another common method used by the lungs to protect themselves can also create problems. The airways in the lungs are surrounded by bands of muscle. When the breathing tubes are irritated, these muscle bands can tighten, making the breathing tube narrower as the lungs try to keep the irritant out. The rapid tightening of these muscles is called bronchospasm. Some lungs are very sensitive to irritants. Bronchospams may cause serious problems for people with asthma because it is more difficult to breathe through narrowed airways, and causes chest tightness, laboured breathing and wheezing.

This information was taken from the ATS/ERS Standards for the Diagnosis and Treatment of Patients with COPD (http://www.ersnet.org/COPD).